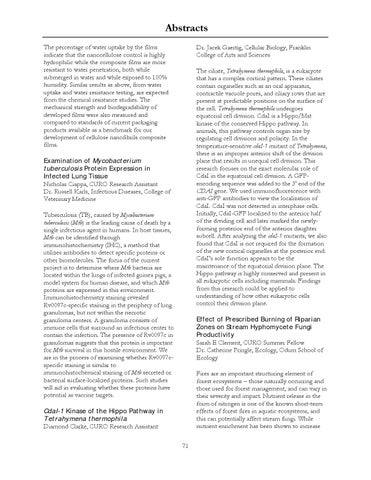 Abstracts The percentage of water uptake by the films indicate that the nanocellulose control is highly hydrophilic while the composite films are more resistant to water penetration, both while submerged in water and while exposed to 100% humidity. Similar results as above, from water uptake and water resistance testing, are expected from the chemical resistance studies. The mechanical strength and biodegradability of developed films were also measured and compared to standards of current packaging products available as a benchmark for our development of cellulose nanofibrils composite films.

Dr. Jacek Gaertig, Cellular Biology, Franklin College of Arts and Sciences The ciliate, Tetrahymena thermophila, is a eukaryote that has a complex cortical pattern. These ciliates contain organelles such as an oral apparatus, contractile vacuole pores, and ciliary rows that are present at predictable positions on the surface of the cell. Tetrahymena thermophila undergoes equatorial cell division. CdaI is a Hippo/Mst kinase of the conserved Hippo pathway. In animals, this pathway controls organ size by regulating cell divisions and polarity. In the temperature-sensitive cdaI-1 mutant of Tetrahymena, there is an improper anterior shift of the division plane that results in unequal cell division. This research focuses on the exact molecular role of CdaI in the equatorial cell division. A GFPencoding sequence was added to the 3â&amp;#x20AC;&amp;#x2122; end of the CDAI gene. We used immunofluorescence with anti-GFP antibodies to view the localization of CdaI. CdaI was not detected in interphase cells. Initially, CdaI-GFP localized to the anterior half of the dividing cell and later marked the newlyforming posterior end of the anterior daughter subcell. After analyzing the cdaI-1 mutants, we also found that CdaI is not required for the formation of the new cortical organelles at the posterior end. CdaIâ&amp;#x20AC;&amp;#x2122;s sole function appears to be the maintenance of the equatorial division plane. The Hippo pathway is highly conserved and present in all eukaryotic cells including mammals. Findings from this research could be applied to understanding of how other eukaryotic cells control their division plane.

Examination of Mycobacterium tuberculosis Protein Expression in Infected Lung Tissue Nicholas Ciappa, CURO Research Assistant Dr. Russell Karls, Infectious Diseases, College of Veterinary Medicine Tuberculosis (TB), caused by Mycobacterium tuberculosis (Mtb) is the leading cause of death by a single infectious agent in humans. In host tissues, Mtb can be identified through immunohistochemistry (IHC), a method that utilizes antibodies to detect specific proteins or other biomolecules. The focus of the current project is to determine where Mtb bacteria are located within the lungs of infected guinea pigs, a model system for human disease, and which Mtb proteins are expressed in this environment. Immunohistochemistry staining revealed Rv0097c-specific staining in the periphery of lung granulomas, but not within the necrotic granuloma centers. A granuloma consists of immune cells that surround an infectious center to contain the infection. The presence of Rv0097c in granulomas suggests that this protein is important for Mtb survival in this hostile environment. We are in the process of examining whether Rv0097cspecific staining is similar to immunohistochemical staining of Mtb secreted or bacterial surface-localized proteins. Such studies will aid in evaluating whether these proteins have potential as vaccine targets.

Effect of Prescribed Burning of Riparian Zones on Stream Hyphomycete Fungi Productivity Sarah E Clement, CURO Summer Fellow Dr. Catherine Pringle, Ecology, Odum School of Ecology Fires are an important structuring element of forest ecosystems â&amp;#x20AC;&amp;#x201C; those naturally occurring and those used for forest management, and can vary in their severity and impact. Nutrient release in the form of nitrogen is one of the known short-term effects of forest fires in aquatic ecosystems, and this can potentially affect stream fungi. While nutrient enrichment has been shown to increase