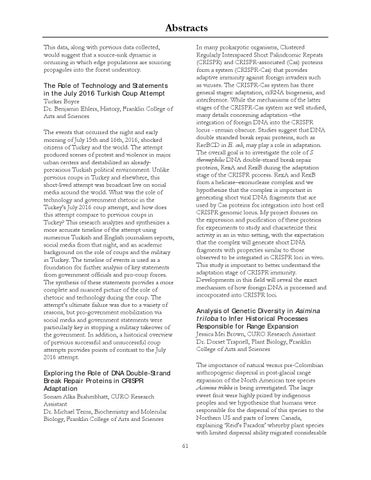 Abstracts In many prokaryotic organisms, Clustered Regularly Interspaced Short Palindromic Repeats (CRISPR) and CRISPR-associated (Cas) proteins form a system (CRISPR-Cas) that provides adaptive immunity against foreign invaders such as viruses. The CRISPR-Cas system has three general stages: adaptation, crRNA biogenesis, and interference. While the mechanisms of the latter stages of the CRISPR-Cas system are well studied, many details concerning adaptation –the integration of foreign DNA into the CRISPR locus - remain obscure. Studies suggest that DNA double stranded break repair proteins, such as RecBCD in E. coli, may play a role in adaptation. The overall goal is to investigate the role of S. thermophilus DNA double-strand break repair proteins, RexA and RexB during the adaptation stage of the CRISPR process. RexA and RexB form a helicase–exonuclease complex and we hypothesize that the complex is important in generating short viral DNA fragments that are used by Cas proteins for integration into host cell CRISPR genomic locus. My project focuses on the expression and purification of these proteins for experiments to study and characterize their activity in an in vitro setting, with the expectation that the complex will generate short DNA fragments with properties similar to those observed to be integrated in CRISPR loci in vivo. This study is important to better understand the adaptation stage of CRISPR immunity. Developments in this field will reveal the exact mechanism of how foreign DNA is processed and incorporated into CRISPR loci.

This data, along with previous data collected, would suggest that a source-sink dynamic is occurring in which edge populations are sourcing propagules into the forest understory. The Role of Technology and Statements in the July 2016 Turkish Coup Attempt Tucker Boyce Dr. Benjamin Ehlers, History, Franklin College of Arts and Sciences The events that occurred the night and early morning of July 15th and 16th, 2016, shocked citizens of Turkey and the world. The attempt produced scenes of protest and violence in major urban centers and destabilized an alreadyprecarious Turkish political environment. Unlike previous coups in Turkey and elsewhere, this short-lived attempt was broadcast live on social media around the world. What was the role of technology and government rhetoric in the Turkey’s July 2016 coup attempt, and how does this attempt compare to previous coups in Turkey? This research analyzes and synthesizes a more accurate timeline of the attempt using numerous Turkish and English journalism reports, social media from that night, and an academic background on the role of coups and the military in Turkey. The timeline of events is used as a foundation for further analysis of key statements from government officials and pro-coup forces. The synthesis of these statements provides a more complete and nuanced picture of the role of rhetoric and technology during the coup. The attempt’s ultimate failure was due to a variety of reasons, but pro-government mobilization via social media and government statements were particularly key in stopping a military takeover of the government. In addition, a historical overview of previous successful and unsuccessful coup attempts provides points of contrast to the July 2016 attempt.

Analysis of Genetic Diversity in Asimina triloba to Infer Historical Processes Responsible for Range Expansion Jessica Mei Brown, CURO Research Assistant Dr. Dorset Trapnell, Plant Biology, Franklin College of Arts and Sciences The importance of natural versus pre-Colombian anthropogenic dispersal in post-glacial range expansion of the North American tree species Asimina triloba is being investigated. The large sweet fruit were highly prized by indigenous peoples and we hypothesize that humans were responsible for the dispersal of this species to the Northern US and parts of lower Canada, explaining ‘Reid’s Paradox’ whereby plant species with limited dispersal ability migrated considerable