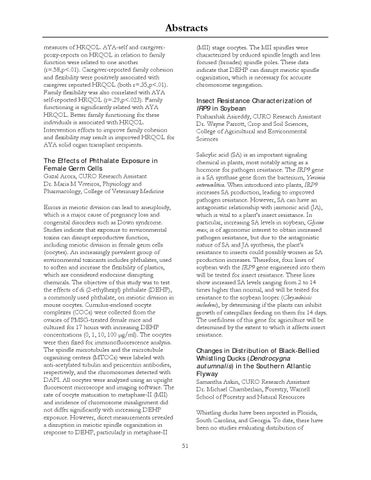 Abstracts measures of HRQOL. AYA-self and caregiverproxy-reports on HRQOL in relation to family function were related to one another (r=.58,p&lt;.01). Caregiver-reported family cohesion and flexibility were positively associated with caregiver reported HRQOL (both r=.35,p&lt;.01). Family flexibility was also correlated with AYA self-reported HRQOL (r=.29,p&lt;.023). Family functioning is significantly related with AYA HRQOL. Better family functioning for these individuals is associated with HRQOL. Intervention efforts to improve family cohesion and flexibility may result in improved HRQOL for AYA solid organ transplant recipients.

(MII) stage oocytes. The MII spindles were characterized by reduced spindle length and less focused (broader) spindle poles. These data indicate that DEHP can disrupt meiotic spindle organization, which is necessary for accurate chromosome segregation. Insect Resistance Characterization of IRP9 in Soybean Praharshak Asireddy, CURO Research Assistant Dr. Wayne Parrott, Crop and Soil Sciences, College of Agricultural and Environmental Sciences Salicylic acid (SA) is an important signaling chemical in plants, most notably acting as a hormone for pathogen resistance. The IRP9 gene is a SA synthase gene from the bacterium, Yersinia enterocolitica. When introduced into plants, IRP9 increases SA production, leading to improved pathogen resistance. However, SA can have an antagonistic relationship with jasmonic acid (JA), which is vital to a plant’s insect resistance. In particular, increasing SA levels in soybean, Glycine max, is of agronomic interest to obtain increased pathogen resistance, but due to the antagonistic nature of SA and JA synthesis, the plant’s resistance to insects could possibly worsen as SA production increases. Therefore, four lines of soybean with the IRP9 gene engineered into them will be tested for insect resistance. These lines show increased SA levels ranging from 2 to 14 times higher than normal, and will be tested for resistance to the soybean looper (Chrysodeixis includens), by determining if the plants can inhibit growth of caterpillars feeding on them for 14 days. The usefulness of this gene for agriculture will be determined by the extent to which it affects insect resistance.

The Effects of Phthalate Exposure in Female Germ Cells Gazal Arora, CURO Research Assistant Dr. Maria M Viveiros, Physiology and Pharmacology, College of Veterinary Medicine Errors in meiotic division can lead to aneuploidy, which is a major cause of pregnancy loss and congenital disorders such as Down syndrome. Studies indicate that exposure to environmental toxins can disrupt reproductive function, including meiotic division in female germ cells (oocytes). An increasingly prevalent group of environmental toxicants includes phthalates, used to soften and increase the flexibility of plastics, which are considered endocrine disrupting chemicals. The objective of this study was to test the effects of di (2-ethylhexyl) phthalate (DEHP), a commonly used phthalate, on meiotic division in mouse oocytes. Cumulus-enclosed oocyte complexes (COCs) were collected from the ovaries of PMSG-treated female mice and cultured for 17 hours with increasing DEHP concentrations (0, 1, 10, 100 μg/ml). The oocytes were then fixed for immunofluorescence analysis. The spindle microtubules and the microtubule organizing centers (MTOCs) were labeled with anti-acetylated tubulin and pericentrin antibodies, respectively, and the chromosomes detected with DAPI. All oocytes were analyzed using an upright fluorescent microscope and imaging software. The rate of oocyte maturation to metaphase-II (MII) and incidence of chromosome misalignment did not differ significantly with increasing DEHP exposure. However, direct measurements revealed a disruption in meiotic spindle organization in response to DEHP, particularly in metaphase-II

Changes in Distribution of Black-Bellied Whistling Ducks (Dendrocygna autumnalis) in the Southern Atlantic Flyway Samantha Askin, CURO Research Assistant Dr. Michael Chamberlain, Forestry, Warnell School of Forestry and Natural Resources Whistling ducks have been reported in Florida, South Carolina, and Georgia. To date, there have been no studies evaluating distribution of 51