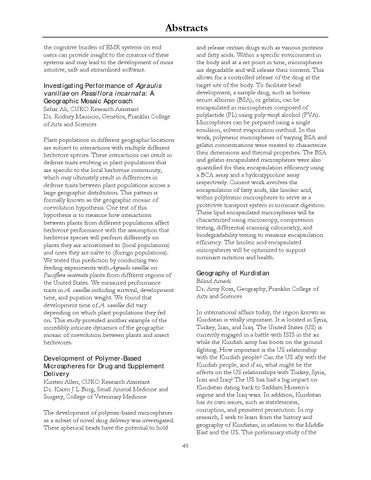 Abstracts the cognitive burden of EMR systems on end users can provide insight to the creators of these systems and may lead to the development of more intuitive, safe and streamlined software.

and release certain drugs such as various proteins and fatty acids. Within a specific environment in the body and at a set point in time, microspheres are degradable and will release their content. This allows for a controlled release of the drug at the target site of the body. To facilitate bead development, a sample drug, such as bovine serum albumin (BSA), or gelatin, can be encapsulated in microspheres composed of polylactide (PL) using poly-vinyl alcohol (PVA). Microspheres can be prepared using a single emulsion, solvent evaporation method. In this work, polymeric microspheres of varying BSA and gelatin concentrations were created to characterize their dimensions and thermal properties. The BSA and gelatin encapsulated microspheres were also quantified for their encapsulation efficiency using a BCA assay and a hydroxyproline assay respectively. Current work involves the encapsulation of fatty acids, like linoleic acid, within polylmeric microspheres to serve as a protective transport system in ruminant digestion. These lipid encapsulated microspheres will be characterized using microscopy, compression testing, differential scanning calorimetry, and biodegradability testing to measure encapsulation efficiency. The linoleic acid encapsulated micropsheres will be optimized to support ruminant nutrition and health.

Investigating Performance of Agraulis vanillae on Passiflora incarnata: A Geographic Mosaic Approach Sehar Ali, CURO Research Assistant Dr. Rodney Mauricio, Genetics, Franklin College of Arts and Sciences Plant populations in different geographic locations are subject to interactions with multiple different herbivore species. These interactions can result in defense traits evolving in plant populations that are specific to the local herbivore community, which may ultimately result in differences in defense traits between plant populations across a large geographic distribution. This pattern is formally known as the geographic mosaic of coevolution hypothesis. One test of this hypothesis is to measure how interactions between plants from different populations affect herbivore performance with the assumption that herbivore species will perform differently on plants they are accustomed to (local populations) and ones they are naĂŻve to (foreign populations). We tested this prediction by conducting two feeding experiments with Agraulis vanillae on Passiflora incarnata plants from different regions of the United States. We measured performance traits in A. vanillae including survival, development time, and pupation weight. We found that development time of A. vanillae did vary depending on which plant populations they fed on. This study provided another example of the incredibly intricate dynamics of the geographic mosaic of coevolution between plants and insect herbivores.

Geography of Kurdistan Bilind Amedi Dr. Amy Ross, Geography, Franklin College of Arts and Sciences In international affairs today, the region known as Kurdistan is vitally important. It is located in Syria, Turkey, Iran, and Iraq. The United States (US) is currently engaged in a battle with ISIS in the air while the Kurdish army has boots on the ground fighting. How important is the US relationship with the Kurdish people? Can the US ally with the Kurdish people, and if so, what might be the affects on the US relationships with Turkey, Syria, Iran and Iraq? The US has had a big impact on Kurdistan dating back to Saddam Hussein&#39;s regime and the Iraq wars. In addition, Kurdistan has its own issues, such as statelessness, corruption, and persistent persecution. In my research, I seek to learn from the history and geography of Kurdistan, in relation to the Middle East and the US. This preliminary study of the

Development of Polymer-Based Microspheres for Drug and Supplement Delivery Kirsten Allen, CURO Research Assistant Dr. Karen J L Burg, Small Animal Medicine and Surgery, College of Veterinary Medicine The development of polymer-based microspheres as a subset of novel drug delivery was investigated. These spherical beads have the potential to hold 49