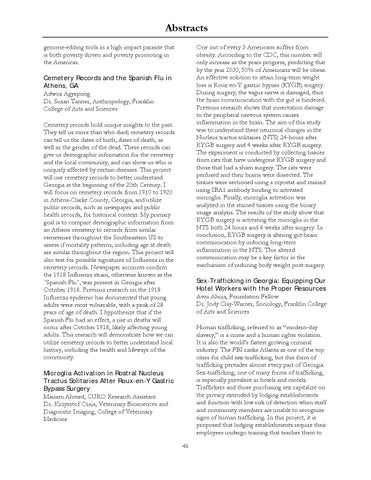 Abstracts One out of every 3 Americans suffers from obesity. According to the CDC, this number will only increase as the years progress, predicting that by the year 2030, 50% of Americans will be obese. An effective solution to attain long-term weight loss is Roux-en-Y gastric bypass (RYGB) surgery. During surgery, the vagus nerve is damaged, thus the brain communication with the gut is hindered. Previous research shows that innervation damage to the peripheral nervous system causes inflammation in the brain. The aim of this study was to understand these neuronal changes in the Nucleus tractus solitaries (NTS) 24-hours after RYGB surgery and 4 weeks after RYGB surgery. The experiment is conducted by collecting tissues from rats that have undergone RYGB surgery and those that had a sham surgery. The rats were perfused and their brains were dissected. The tissues were sectioned using a cryostat and stained using IBA1 antibody binding to activated microglia. Finally, microglia activation was analyzed in the stained tissues using the binary image analysis. The results of the study show that RYGB surgery is activating the microglia in the NTS both 24 hours and 4 weeks after surgery. In conclusion, RYGB surgery is altering gut-brain communication by inducing long-term inflammation in the NTS. This altered communication may be a key factor in the mechanism of reducing body weight post-surgery.

genome-editing tools in a high impact parasite that is both poverty driven and poverty promoting in the Americas. Cemetery Records and the Spanish Flu in Athens, GA Adwoa Agyepong Dr. Susan Tanner, Anthropology, Franklin College of Arts and Sciences Cemetery records hold unique insights to the past. They tell us more than who died; cemetery records can tell us the dates of birth, dates of death, as well as the gender of the dead. These records can give us demographic information for the cemetery and the local community, and can show us who is uniquely affected by certain diseases. This project will use cemetery records to better understand Georgia at the beginning of the 20th Century. I will focus on cemetery records from 1910 to 1920 in Athens-Clarke County, Georgia, and utilize public records, such as newspaper and public health records, for historical context. My primary goal is to compare demographic information from an Athens cemetery to records from similar cemeteries throughout the Southeastern US to assess if mortality patterns, including age at death are similar throughout the region. This project will also test for possible signatures of Influenza in the cemetery records. Newspaper accounts confirm the 1918 Influenza strain, otherwise known as the &quot;Spanish Flu&quot;, was present in Georgia after October 1918. Previous research on the 1918 Influenza epidemic has documented that young adults were most vulnerable, with a peak of 28 years of age of death. I hypothesize that if the Spanish Flu had an effect, a rise in deaths will occur after October 1918, likely affecting young adults. This research will demonstrate how we can utilize cemetery records to better understand local history, including the health and lifeways of the community.

Sex-Trafficking in Georgia: Equipping Our Hotel Workers with the Proper Resources Avni Ahuja, Foundation Fellow Dr. Jody Clay-Warner, Sociology, Franklin College of Arts and Sciences Human trafficking, referred to as “modern-day slavery,” is a crime and a human rights violation. It is also the world’s fastest growing criminal industry. The FBI ranks Atlanta as one of the top cities for child sex-trafficking, but this form of trafficking pervades almost every part of Georgia. Sex-trafficking, one of many forms of trafficking, is especially prevalent in hotels and motels. Traffickers and those purchasing sex capitalize on the privacy extended by lodging establishments and function with low risk of detection when staff and community members are unable to recognize signs of human trafficking. In this project, it is proposed that lodging establishments require their employees undergo training that teaches them to