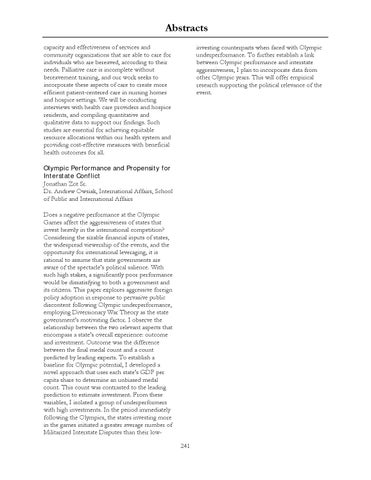 Abstracts capacity and effectiveness of services and community organizations that are able to care for individuals who are bereaved, according to their needs. Palliative care is incomplete without bereavement training, and our work seeks to incorporate these aspects of care to create more efficient patient-centered care in nursing homes and hospice settings. We will be conducting interviews with health care providers and hospice residents, and compiling quantitative and qualitative data to support our findings. Such studies are essential for achieving equitable resource allocations within our health system and providing cost-effective measures with beneficial health outcomes for all.

investing counterparts when faced with Olympic underperformance. To further establish a link between Olympic performance and interstate aggressiveness, I plan to incorporate data from other Olympic years. This will offer empirical research supporting the political relevance of the event.

Olympic Performance and Propensity for Interstate Conflict Jonathan Zot Sr. Dr. Andrew Owsiak, International Affairs, School of Public and International Affairs Does a negative performance at the Olympic Games affect the aggressiveness of states that invest heavily in the international competition? Considering the sizable financial inputs of states, the widespread viewership of the events, and the opportunity for international leveraging, it is rational to assume that state governments are aware of the spectacle’s political salience. With such high stakes, a significantly poor performance would be dissatisfying to both a government and its citizens. This paper explores aggressive foreign policy adoption in response to pervasive public discontent following Olympic underperformance, employing Diversionary War Theory as the state government’s motivating factor. I observe the relationship between the two relevant aspects that encompass a state’s overall experience: outcome and investment. Outcome was the difference between the final medal count and a count predicted by leading experts. To establish a baseline for Olympic potential, I developed a novel approach that uses each state’s GDP per capita share to determine an unbiased medal count. This count was contrasted to the leading prediction to estimate investment. From these variables, I isolated a group of underperformers with high investments. In the period immediately following the Olympics, the states investing more in the games initiated a greater average number of Militarized Interstate Disputes than their low241