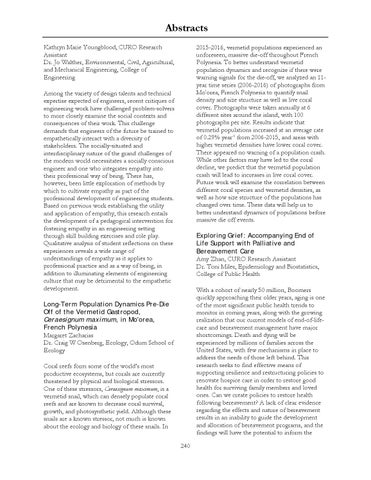 2015-2016, vermetid populations experienced an unforeseen, massive die-off throughout French Polynesia. To better understand vermetid population dynamics and recognize if there were warning signals for the die-off, we analyzed an 11year time series (2006-2016) of photographs from Mo&#39;orea, French Polynesia to quantify snail density and size structure as well as live coral cover. Photographs were taken annually at 6 different sites around the island, with 100 photographs per site. Results indicate that vermetid populations increased at an average rate of 0.29% year-1 from 2006-2015, and areas with higher vermetid densities have lower coral cover. There appeared no warning of a population crash. While other factors may have led to the coral decline, we predict that the vermetid population crash will lead to increases in live coral cover. Future work will examine the correlation between different coral species and vermetid densities, as well as how size structure of the populations has changed over time. These data will help us to better understand dynamics of populations before massive die off events.

Among the variety of design talents and technical expertise expected of engineers, recent critiques of engineering work have challenged problem-solvers to more closely examine the social contexts and consequences of their work. This challenge demands that engineers of the future be trained to empathetically interact with a diversity of stakeholders. The socially-situated and interdisciplinary nature of the grand challenges of the modern world necessitates a socially conscious engineer and one who integrates empathy into their professional way of being. There has, however, been little exploration of methods by which to cultivate empathy as part of the professional development of engineering students. Based on previous work establishing the utility and application of empathy, this research entails the development of a pedagogical intervention for fostering empathy in an engineering setting through skill building exercises and role play. Qualitative analysis of student reflections on these experiences reveals a wide range of understandings of empathy as it applies to professional practice and as a way of being, in addition to illuminating elements of engineering culture that may be detrimental to the empathetic development.

Exploring Grief: Accompanying End of Life Support with Palliative and Bereavement Care Amy Zhan, CURO Research Assistant Dr. Toni Miles, Epidemiology and Biostatistics, College of Public Health With a cohort of nearly 50 million, Boomers quickly approaching their older years, aging is one of the most significant public health trends to monitor in coming years, along with the growing realization that our current models of end-of-lifecare and bereavement management have major shortcomings. Death and dying will be experienced by millions of families across the United States, with few mechanisms in place to address the needs of those left behind. This research seeks to find effective means of supporting resilience and restructuring policies to renovate hospice care in order to restore good health for surviving family members and loved ones. Can we create policies to restore health following bereavement? A lack of clear evidence regarding the effects and nature of bereavement results in an inability to guide the development and allocation of bereavement programs, and the findings will have the potential to inform the

Long-Term Population Dynamics Pre-Die Off of the Vermetid Gastropod, Ceraesignum maximum, in Mo&#39;orea, French Polynesia Margaret Zacharias Dr. Craig W Osenberg, Ecology, Odum School of Ecology Coral reefs form some of the worldâ&amp;#x20AC;&amp;#x2122;s most productive ecosystems, but corals are currently threatened by physical and biological stressors. One of these stressors, Ceraesignum maximum, is a vermetid snail, which can densely populate coral reefs and are known to decrease coral survival, growth, and photosynthetic yield. Although these snails are a known stressor, not much is known about the ecology and biology of these snails. In 240