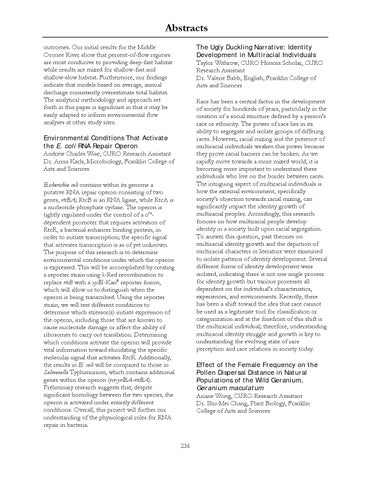 Abstracts outcomes. Our initial results for the Middle Oconee River show that percent-of-flow regimes are most conducive to providing deep-fast habitat while results are mixed for shallow-fast and shallow-slow habitat. Furthermore, our findings indicate that models based on average, annual discharge consistently overestimate total habitat. The analytical methodology and approach set forth in this paper is significant in that it may be easily adapted to inform environmental flow analyses at other study sites.

The Ugly Duckling Narrative: Identity Development in Multiracial Individuals Taylor Withrow, CURO Honors Scholar, CURO Research Assistant Dr. Valerie Babb, English, Franklin College of Arts and Sciences Race has been a central factor in the development of society for hundreds of years, particularly in the creation of a social structure defined by a person’s race or ethnicity. The power of race lies in its ability to segregate and isolate groups of differing races. However, racial mixing and the presence of multiracial individuals weaken this power because they prove racial barriers can be broken. As we rapidly move towards a more mixed world, it is becoming more important to understand these individuals who live on the border between races. The intriguing aspect of multiracial individuals is how the external environment, specifically society’s objection towards racial mixing, can significantly impact the identity growth of multiracial peoples. Accordingly, this research focuses on how multiracial people develop identity in a society built upon racial segregation. To answer this question, past theories on multiracial identity growth and the depiction of multiracial characters in literature were examined to isolate patterns of identity development. Several different forms of identity development were isolated, indicating there is not one single process for identity growth but various processes all dependent on the individual’s characteristics, experiences, and environments. Recently, there has been a shift toward the idea that race cannot be used as a legitimate tool for classification or categorization and at the forefront of this shift is the multiracial individual; therefore, understanding multiracial identity struggle and growth is key to understanding the evolving state of race perception and race relations in society today.

Environmental Conditions That Activate the E. coli RNA Repair Operon Andrew Charles Wise, CURO Research Assistant Dr. Anna Karls, Microbiology, Franklin College of Arts and Sciences Escherichia coli contains within its genome a putative RNA repair operon consisting of two genes, rtcBA; RtcB is an RNA ligase, while RtcA is a nucleotide phosphate cyclase. The operon is tightly regulated under the control of a σ54dependent promoter that requires activation of RtcR, a bacterial enhancer binding protein, in order to initiate transcription; the specific signal that activates transcription is as of yet unknown. The purpose of this research is to determine environmental conditions under which the operon is expressed. This will be accomplished by creating a reporter strain using λ-Red recombination to replace rtcB with a xylE-KanR reporter fusion, which will allow us to distinguish when the operon is being transcribed. Using the reporter strain, we will test different conditions to determine which stressor(s) initiate expression of the operon, including those that are known to cause nucleotide damage or affect the ability of ribosomes to carry out translation. Determining which conditions activate the operon will provide vital information toward elucidating the specific molecular signal that activates RtcR. Additionally, the results in E. coli will be compared to those in Salmonella Typhimurium, which contains additional genes within the operon (rsr-yrlBA-rtcBA). Preliminary research suggests that, despite significant homology between the two species, the operon is activated under entirely different conditions. Overall, this project will further our understanding of the physiological roles for RNA repair in bacteria.