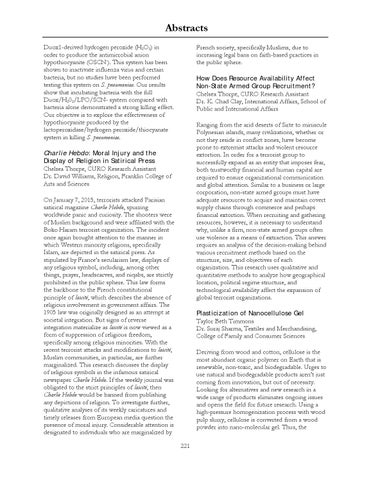 Abstracts Duox1-derived hydrogen peroxide (H2O2) in order to produce the antimicrobial anion hypothiocyanite (OSCN-). This system has been shown to inactivate influenza virus and certain bacteria, but no studies have been performed testing this system on S. pneumoniae. Our results show that incubating bacteria with the full Duox/H202/LPO/SCN- system compared with bacteria alone demonstrated a strong killing effect. Our objective is to explore the effectiveness of hypothiocyanite produced by the lactoperoxidase/hydrogen peroxide/thiocyanate system in killing S. pneumoniae.

French society, specifically Muslims, due to increasing legal bans on faith-based practices in the public sphere. How Does Resource Availability Affect Non-State Armed Group Recruitment? Chelsea Thorpe, CURO Research Assistant Dr. K. Chad Clay, International Affairs, School of Public and International Affairs Ranging from the arid deserts of Sirte to miniscule Polynesian islands, many civilizations, whether or not they reside in conflict zones, have become prone to extremist attacks and violent resource extortion. In order for a terrorist group to successfully expand as an entity that imposes fear, both trustworthy financial and human capital are required to ensure organizational communication and global attention. Similar to a business or large corporation, non-state armed groups must have adequate resources to acquire and maintain covert supply chains through commerce and perhaps financial extortion. When recruiting and gathering resources, however, it is necessary to understand why, unlike a firm, non-state armed groups often use violence as a means of extraction. This answer requires an analysis of the decision-making behind various recruitment methods based on the structure, size, and objectives of each organization. This research uses qualitative and quantitative methods to analyze how geographical location, political regime structure, and technological availability affect the expansion of global terrorist organizations.

Charlie Hebdo: Moral Injury and the Display of Religion in Satirical Press Chelsea Thorpe, CURO Research Assistant Dr. David Williams, Religion, Franklin College of Arts and Sciences On January 7, 2015, terrorists attacked Parisian satirical magazine Charlie Hebdo, spurring worldwide panic and curiosity. The shooters were of Muslim background and were affiliated with the Boko Haram terrorist organization. The incident once again brought attention to the manner in which Western minority religions, specifically Islam, are depicted in the satirical press. As stipulated by France’s secularism law, displays of any religious symbol, including, among other things, prayer, headscarves, and niqabs, are strictly prohibited in the public sphere. This law forms the backbone to the French constitutional principle of laïcité, which describes the absence of religious involvement in government affairs. The 1905 law was originally designed as an attempt at societal integration. But signs of reverse integration materialize as laïcité is now viewed as a form of suppression of religious freedom, specifically among religious minorities. With the recent terrorist attacks and modifications to laïcité, Muslim communities, in particular, are further marginalized. This research discusses the display of religious symbols in the infamous satirical newspaper Charlie Hebdo. If the weekly journal was obligated to the strict principles of laïcité, then Charlie Hebdo would be banned from publishing any depictions of religion. To investigate further, qualitative analyses of its weekly caricatures and timely releases from European media question the presence of moral injury. Considerable attention is designated to individuals who are marginalized by

Plasticization of Nanocellulose Gel Taylor Beth Timmons Dr. Suraj Sharma, Textiles and Merchandising, College of Family and Consumer Sciences Deriving from wood and cotton, cellulose is the most abundant organic polymer on Earth that is renewable, non-toxic, and biodegradable. Urges to use natural and biodegradable products aren’t just coming from innovation, but out of necessity. Looking for alternatives and new research in a wide range of products eliminates ongoing issues and opens the field for future research. Using a high-pressure homogenization process with wood pulp slurry, cellulose is converted from a wood powder into nano-molecular gel. Thus, the 221