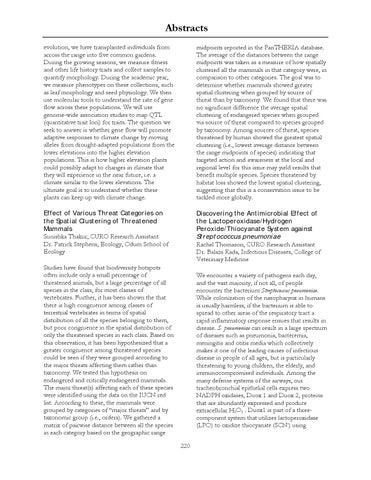 Abstracts evolution, we have transplanted individuals from across the range into five common gardens. During the growing seasons, we measure fitness and other life history traits and collect samples to quantify morphology. During the academic year, we measure phenotypes on these collections, such as leaf morphology and seed physiology. We then use molecular tools to understand the rate of gene flow across these populations. We will use genome-wide association studies to map QTL (quantitative trait loci) for traits. The question we seek to answer is whether gene flow will promote adaptive responses to climate change by moving alleles from drought-adapted populations from the lower elevations into the higher elevation populations. This is how higher elevation plants could possibly adapt to changes in climate that they will experience in the near future, i.e. a climate similar to the lower elevations. The ultimate goal is to understand whether these plants can keep up with climate change.

midpoints reported in the PanTHERIA database. The average of the distances between the range midpoints was taken as a measure of how spatially clustered all the mammals in that category were, in comparison to other categories. The goal was to determine whether mammals showed greater spatial clustering when grouped by source of threat than by taxonomy. We found that there was no significant difference the average spatial clustering of endangered species when grouped via source of threat compared to species grouped by taxonomy. Among sources of threat, species threatened by human showed the greatest spatial clustering (i.e., lowest average distance between the range midpoints of species) indicating that targeted action and awareness at the local and regional level for this issue may yield results that benefit multiple species. Species threatened by habitat loss showed the lowest spatial clustering, suggesting that this is a conservation issue to be tackled more globally.

Studies have found that biodiversity hotspots often include only a small percentage of threatened animals, but a large percentage of all species in the class, for most classes of vertebrates. Further, it has been shown the that there is high congruence among classes of terrestrial vertebrates in terms of spatial distribution of all the species belonging to them, but poor congruence in the spatial distribution of only the threatened species in each class. Based on this observation, it has been hypothesized that a greater congruence among threatened species could be seen if they were grouped according to the major threats affecting them rather than taxonomy. We tested this hypothesis on endangered and critically endangered mammals. The major threat(s) affecting each of these species were identified using the data on the IUCN red list. According to these, the mammals were grouped by categories of â&amp;#x20AC;&amp;#x153;major threatsâ&amp;#x20AC;? and by taxonomic group (i.e., orders). We gathered a matrix of pairwise distance between all the species in each category based on the geographic range

We encounter a variety of pathogens each day, and the vast majority, if not all, of people encounter the bacterium Streptococcus pneumoniae. While colonization of the nasopharynx in humans is usually harmless, if the bacterium is able to spread to other areas of the respiratory tract a rapid inflammatory response ensues that results in disease. S. pneumoniae can result in a large spectrum of diseases such as pneumonia, bacteremia, meningitis and otitis media which collectively makes it one of the leading causes of infectious disease in people of all ages, but is particularly threatening to young children, the elderly, and immunocompromised individuals. Among the many defense systems of the airways, our tracheobronchial epithelial cells express two NADPH oxidases, Duox 1 and Duox 2, proteins that are abundantly expressed and produce extracellular H2O2 . Duox1 is part of a threecomponent system that utilizes lactoperoxidase (LPO) to oxidize thiocyanate (SCN-) using 220