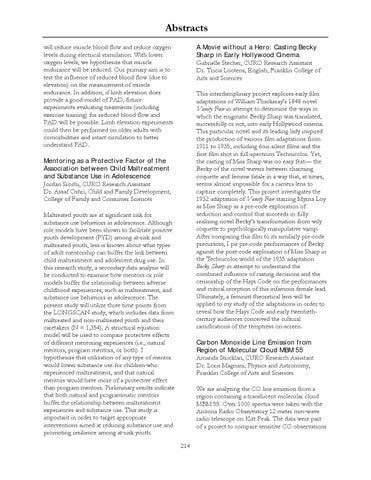 Abstracts will reduce muscle blood flow and reduce oxygen levels during electrical stimulation. With lower oxygen levels, we hypothesize that muscle endurance will be reduced. Our primary aim is to test the influence of reduced blood flow (due to elevation) on the measurement of muscle endurance. In addition, if limb elevation does provide a good model of PAD, future experiments evaluating treatments (including exercise training) for reduced blood flow and PAD will be possible. Limb elevation experiments could then be performed on older adults with comorbidities and intact circulation to better understand PAD.

A Movie without a Hero: Casting Becky Sharp in Early Hollywood Cinema Gabrielle Stecher, CURO Research Assistant Dr. Tricia Lootens, English, Franklin College of Arts and Sciences This interdisciplinary project explores early film adaptations of William Thackeray’s 1848 novel Vanity Fair in attempt to determine the ways in which the enigmatic Becky Sharp was translated, successfully or not, into early Hollywood cinema. This particular novel and its leading lady inspired the production of various film adaptations from 1911 to 1935, including four silent films and the first film shot in full-spectrum Technicolor. Yet, the casting of Miss Sharp was no easy feat— the Becky of the novel wavers between charming coquette and femme fatale in a way that, at times, seems almost impossible for a camera lens to capture completely. This project investigates the 1932 adaptation of Vanity Fair starring Myrna Loy as Miss Sharp as a pre-code exploration of seduction and control that succeeds in fully realizing novel Becky’s transformation from wily coquette to psychologically manipulative vamp. After comparing this film to its similarly pre-code precursors, I pit pre-code performances of Becky against the post-code exploration of Miss Sharp in the Technicolor world of the 1935 adaptation Becky Sharp in attempt to understand the combined influence of casting decisions and the censorship of the Hays Code on the performances and critical reception of this infamous female lead. Ultimately, a feminist theoretical lens will be applied to my study of the adaptations in order to reveal how the Hays Code and early twentiethcentury audiences conceived the cultural ramifications of the temptress on-screen.

Mentoring as a Protective Factor of the Association between Child Maltreatment and Substance Use in Adolescence Jordan Srochi, CURO Research Assistant Dr. Assaf Oshri, Child and Family Development, College of Family and Consumer Sciences Maltreated youth are at significant risk for substance use behaviors in adolescence. Although role models have been shown to facilitate positive youth development (PYD) among at-risk and maltreated youth, less is known about what types of adult mentorship can buffer the link between child maltreatment and adolescent drug use. In this research study, a secondary data analysis will be conducted to examine how mentors or role models buffer the relationship between adverse childhood experiences, such as maltreatment, and substance use behaviors in adolescence. The present study will utilize three time points from the LONGSCAN study, which includes data from maltreated and non-maltreated youth and their caretakers (N = 1,354). A structural equation model will be used to compare protective effects of different mentoring experiences (i.e., natural mentors, program mentors, or both). I hypothesize that utilization of any type of mentor would lower substance use for children who experienced maltreatment, and that natural mentors would have more of a protective effect than program mentors. Preliminary results indicate that both natural and programmatic mentors buffer the relationship between maltreatment experiences and substance use. This study is important in order to target appropriate interventions aimed at reducing substance use and promoting resilience among at-risk youth.