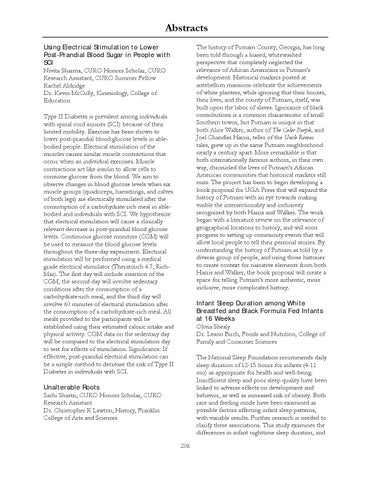 Abstracts The history of Putnam County, Georgia, has long been told through a biased, whitewashed perspective that completely neglected the relevance of African Americans in Putnam’s development. Historical markers posted at antebellum mansions celebrate the achievements of white planters, while ignoring that their houses, their lives, and the county of Putnam, itself, was built upon the labor of slaves. Ignorance of black contributions is a common characteristic of small Southern towns, but Putnam is unique in that both Alice Walker, author of The Color Purple, and Joel Chandler Harris, teller of the Uncle Remus tales, grew up in the same Putnam neighborhood nearly a century apart. More remarkable is that both internationally famous authors, in their own way, chronicled the lives of Putnam’s African American communities that historical markers still miss. The project has been to begin developing a book proposal for UGA Press that will expand the history of Putnam with an eye towards making visible the intersectionality and inclusivity recognized by both Harris and Walker. The work began with a literature review on the relevance of geographical locations to history, and will soon progress to setting up community events that will allow local people to tell their personal stories. By understanding the history of Putnam as told by a diverse group of people, and using those histories to create context for narrative elements from both Harris and Walker, the book proposal will create a space for telling Putnam’s more authentic, more inclusive, more complicated history.

Infant Sleep Duration among White Breastfed and Black Formula Fed Infants at 16 Weeks Olivia Shealy Dr. Leann Birch, Foods and Nutrition, College of Family and Consumer Sciences The National Sleep Foundation recommends daily sleep duration of 12-15 hours for infants (4-11 mo) as appropriate for health and well-being. Insufficient sleep and poor sleep quality have been linked to adverse effects on development and behavior, as well as increased risk of obesity. Both race and feeding mode have been examined as possible factors affecting infant sleep patterns, with variable results. Further research is needed to clarify these associations. This study examines the differences in infant nighttime sleep duration, and