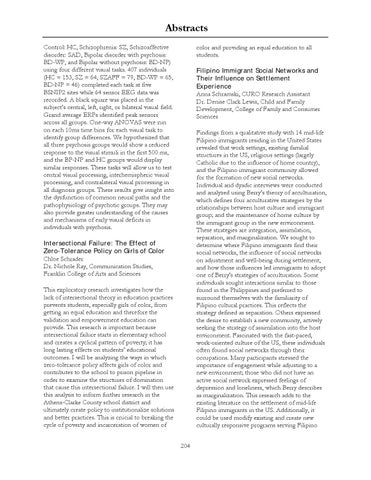 Abstracts Control: HC, Schizophrenia: SZ, Schizoaffective disorder: SAD, Bipolar disorder with psychosis: BD-WP, and Bipolar without psychosis: BD-NP) using four different visual tasks. 407 individuals (HC = 153, SZ = 64, SZAFF = 79, BD-WP = 65, BD-NP = 46) completed each task at five BSNIP2 sites while 64 sensor EEG data was recorded. A black square was placed in the subject’s central, left, right, or bilateral visual field. Grand average ERPs identified peak sensors across all groups. One-way ANOVAS were run on each 10ms time bins for each visual task to identify group differences. We hypothesized that all three psychosis groups would show a reduced response to the visual stimuli in the first 500 ms, and the BP-NP and HC groups would display similar responses. These tasks will allow us to test central visual processing, interhemispheric visual processing, and contralateral visual processing in all diagnosis groups. These results give insight into the dysfunction of common neural paths and the pathophysiology of psychotic groups. They may also provide greater understanding of the causes and mechanisms of early visual deficits in individuals with psychosis.

color and providing an equal education to all students. Filipino Immigrant Social Networks and Their Influence on Settlement Experience Anna Schramski, CURO Research Assistant Dr. Denise Clark Lewis, Child and Family Development, College of Family and Consumer Sciences Findings from a qualitative study with 14 mid-life Filipino immigrants residing in the United States revealed that work settings, existing familial structures in the US, religious settings (largely Catholic due to the influence of home country), and the Filipino immigrant community allowed for the formation of new social networks. Individual and dyadic interviews were conducted and analyzed using Berry’s theory of acculturation, which defines four acculturative strategies by the relationships between host culture and immigrant group; and the maintenance of home culture by the immigrant group in the new environment. These strategies are integration, assimilation, separation, and marginalization. We sought to determine where Filipino immigrants find their social networks, the influence of social networks on adjustment and well-being during settlement, and how those influences led immigrants to adopt one of Berry’s strategies of acculturation. Some individuals sought interactions similar to those found in the Philippines and preferred to surround themselves with the familiarity of Filipino cultural practices. This reflects the strategy defined as separation. Others expressed the desire to establish a new community, actively seeking the strategy of assimilation into the host environment. Fascinated with the fast-paced, work-oriented culture of the US, these individuals often found social networks through their occupations. Many participants stressed the importance of engagement while adjusting to a new environment; those who did not have an active social network expressed feelings of depression and loneliness, which Berry describes as marginalization. This research adds to the existing literature on the settlement of mid-life Filipino immigrants in the US. Additionally, it could be used modify existing and create new culturally responsive programs serving Filipino

Intersectional Failure: The Effect of Zero-Tolerance Policy on Girls of Color Chloe Schrader Dr. Nichole Ray, Communication Studies, Franklin College of Arts and Sciences This exploratory research investigates how the lack of intersectional theory in education practices prevents students, especially girls of color, from getting an equal education and therefore the validation and empowerment education can provide. This research is important because intersectional failure starts in elementary school and creates a cyclical pattern of poverty; it has long lasting effects on students’ educational outcomes. I will be analyzing the ways in which zero-tolerance policy affects girls of color and contributes to the school to prison pipeline in order to examine the structures of domination that cause this intersectional failure. I will then use this analysis to inform further research in the Athens-Clarke County school district and ultimately create policy to institutionalize solutions and better practices. This is crucial to breaking the cycle of poverty and incarceration of women of 204