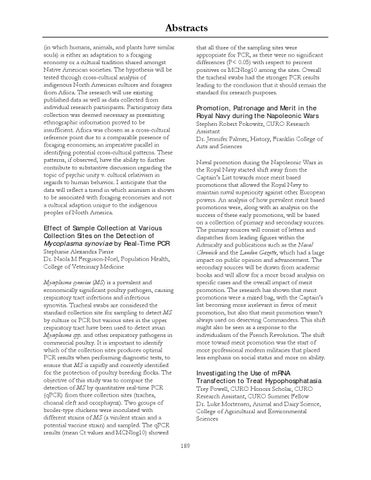 Abstracts (in which humans, animals, and plants have similar souls) is either an adaptation to a foraging economy or a cultural tradition shared amongst Native American societies. The hypothesis will be tested through cross-cultural analysis of indigenous North American cultures and foragers from Africa. The research will use existing published data as well as data collected from individual research participants. Participatory data collection was deemed necessary as preexisting ethnographic information proved to be insufficient. Africa was chosen as a cross-cultural reference point due to a comparable presence of foraging economies; an imperative parallel in identifying potential cross-cultural patterns. These patterns, if observed, have the ability to further contribute to substantive discussion regarding the topic of psychic unity v. cultural relativism in regards to human behavior. I anticipate that the data will reflect a trend in which animism is shown to be associated with foraging economies and not a cultural adaption unique to the indigenous peoples of North America.

that all three of the sampling sites were appropriate for PCR, as there were no significant differences (P&lt; 0.05) with respect to percent positives or MCNlog10 among the sites. Overall the tracheal swabs had the stronger PCR results leading to the conclusion that it should remain the standard for research purposes. Promotion, Patronage and Merit in the Royal Navy during the Napoleonic Wars Stephen Robert Pokowitz, CURO Research Assistant Dr. Jennifer Palmer, History, Franklin College of Arts and Sciences Naval promotion during the Napoleonic Wars in the Royal Navy started shift away from the Captain’s List towards more merit based promotions that allowed the Royal Navy to maintain naval superiority against other European powers. An analysis of how prevalent merit based promotions were, along with an analysis on the success of these early promotions, will be based on a collection of primary and secondary sources. The primary sources will consist of letters and dispatches from leading figures within the Admiralty and publications such as the Naval Chronicle and the London Gazette, which had a large impact on public opinion and advancement. The secondary sources will be drawn from academic books and will allow for a more broad analysis on specific cases and the overall impact of merit promotion. The research has shown that merit promotions were a mixed bag, with the Captain’s list becoming more irrelevant in favor of merit promotion, but also that merit promotion wasn’t always used on deserving Commanders. This shift might also be seen as a response to the individualism of the French Revolution. The shift more toward merit promotion was the start of more professional modern militaries that placed less emphasis on social status and more on ability.

Effect of Sample Collection at Various Collection Sites on the Detection of Mycoplasma synoviae by Real-Time PCR Stephanie Alexandra Pierre Dr. Naola M Ferguson-Noel, Population Health, College of Veterinary Medicine Mycoplasma synoviae (MS) is a prevalent and economically significant poultry pathogen, causing respiratory tract infections and infectious synovitis. Tracheal swabs are considered the standard collection site for sampling to detect MS by culture or PCR but various sites in the upper respiratory tract have been used to detect avian Mycoplasma spp. and other respiratory pathogens in commercial poultry. It is important to identify which of the collection sites produces optimal PCR results when performing diagnostic tests, to ensure that MS is rapidly and correctly identified for the protection of poultry breeding flocks. The objective of this study was to compare the detection of MS by quantitative real-time PCR (qPCR) from three collection sites (trachea, choanal cleft and ororphaynx). Two groups of broiler-type chickens were inoculated with different strains of MS (a virulent strain and a potential vaccine strain) and sampled. The qPCR results (mean Ct values and MCNlog10) showed