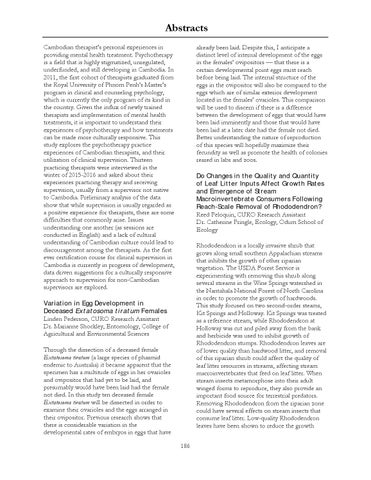 Abstracts Cambodian therapist’s personal experiences in providing mental health treatment. Psychotherapy is a field that is highly stigmatized, unregulated, underfunded, and still developing in Cambodia. In 2011, the first cohort of therapists graduated from the Royal University of Phnom Penh’s Master’s program in clinical and counseling psychology, which is currently the only program of its kind in the country. Given the influx of newly trained therapists and implementation of mental health treatments, it is important to understand their experiences of psychotherapy and how treatments can be made more culturally responsive. This study explores the psychotherapy practice experiences of Cambodian therapists, and their utilization of clinical supervision. Thirteen practicing therapists were interviewed in the winter of 2015-2016 and asked about their experiences practicing therapy and receiving supervision, usually from a supervisor not native to Cambodia. Preliminary analysis of the data show that while supervision is usually regarded as a positive experience for therapists, there are some difficulties that commonly arise. Issues understanding one another (as sessions are conducted in English) and a lack of cultural understanding of Cambodian culture could lead to discouragement among the therapists. As the first ever certification course for clinical supervision in Cambodia is currently in progress of development, data driven suggestions for a culturally responsive approach to supervision for non-Cambodian supervisors are explored.

already been laid. Despite this, I anticipate a distinct level of internal development of the eggs in the females’ ovipositors — that there is a certain developmental point eggs must reach before being laid. The internal structure of the eggs in the ovipositor will also be compared to the eggs which are of similar exterior development located in the females’ ovarioles. This comparison will be used to discern if there is a difference between the development of eggs that would have been laid imminently and those that would have been laid at a later date had the female not died. Better understanding the nature of reproduction of this species will hopefully maximize their fecundity as well as promote the health of colonies reared in labs and zoos. Do Changes in the Quality and Quantity of Leaf Litter Inputs Affect Growth Rates and Emergence of Stream Macroinvertebrate Consumers Following Reach-Scale Removal of Rhododendron? Reed Peloquin, CURO Research Assistant Dr. Catherine Pringle, Ecology, Odum School of Ecology Rhododendron is a locally invasive shrub that grows along small southern Appalachian streams that inhibits the growth of other riparian vegetation. The USDA Forest Service is experimenting with removing this shrub along several streams in the Wine Springs watershed in the Nantahala National Forest of North Carolina in order to promote the growth of hardwoods. This study focused on two second-order steams, Kit Springs and Holloway. Kit Springs was treated as a reference stream, while Rhododendron at Holloway was cut and piled away from the bank and herbicide was used to inhibit growth of Rhododendron stumps. Rhododendron leaves are of lower quality than hardwood litter, and removal of this riparian shrub could affect the quality of leaf litter resources in streams, affecting stream macroinvertebrates that feed on leaf litter. When stream insects metamorphose into their adult winged forms to reproduce, they also provide an important food source for terrestrial predators. Removing Rhododendron from the riparian zone could have several effects on stream insects that consume leaf litter. Low-quality Rhododendron leaves have been shown to reduce the growth

Variation in Egg Development in Deceased Extatosoma tiratum Females Linden Pederson, CURO Research Assistant Dr. Marianne Shockley, Entomology, College of Agricultural and Environmental Sciences Through the dissection of a deceased female Extatosoma tiratum (a large species of phasmid endemic to Australia) it became apparent that the specimen has a multitude of eggs in her ovarioles and ovipositor that had yet to be laid, and presumably would have been laid had the female not died. In this study ten deceased female Extatosoma tiratum will be dissected in order to examine their ovarioles and the eggs arranged in their ovipositor. Previous research shows that there is considerable variation in the developmental rates of embryos in eggs that have 186