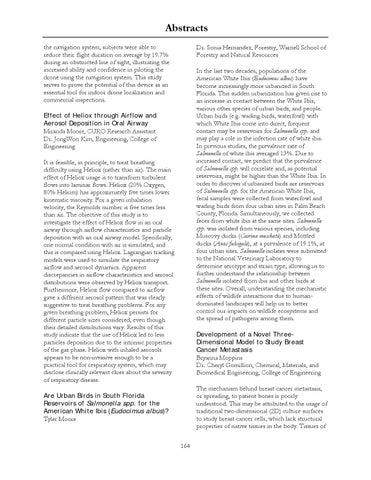 Abstracts the navigation system, subjects were able to reduce their flight duration on average by 19.7% during an obstructed line of sight, illustrating the increased ability and confidence in piloting the drone using the navigation system. This study serves to prove the potential of this device as an essential tool for indoor drone localization and commercial inspections.

Dr. Sonia Hernandez, Forestry, Warnell School of Forestry and Natural Resources In the last two decades, populations of the American White Ibis (Eudocimus albus) have become increasingly more urbanized in South Florida. This sudden urbanization has given rise to an increase in contact between the White Ibis, various other species of urban birds, and people. Urban birds (e.g. wading birds, waterfowl) with which White Ibis come into direct, frequent contact may be reservoirs for Salmonella spp. and may play a role in the infection rate of white ibis. In previous studies, the prevalence rate of Salmonella of white ibis averaged 13%. Due to increased contact, we predict that the prevalence of Salmonella spp. will correlate and, as potential reservoirs, might be higher than the White Ibis. In order to discover if urbanized birds are reservoirs of Salmonella spp. for the American White Ibis, fecal samples were collected from waterfowl and wading birds from four urban sites in Palm Beach County, Florida. Simultaneously, we collected feces from white ibis at the same sites. Salmonella spp. was isolated from various species, including Muscovy ducks (Cairina moschata) and Mottled ducks (Anas fulvigula), at a prevalence of 19.1%, at four urban sites. Salmonella isolates were submitted to the National Veterinary Laboratory to determine serotype and strain type, allowing us to further understand the relationship between Salmonella isolated from ibis and other birds at these sites. Overall, understanding the mechanistic effects of wildlife interactions due to humandominated landscapes will help us to better control our impacts on wildlife ecosystems and the spread of pathogens among them.

Effect of Heliox through Airflow and Aerosol Deposition in Oral Airway Miranda Moore, CURO Research Assistant Dr. JongWon Kim, Engineering, College of Engineering It is feasible, in principle, to treat breathing difficulty using Heliox (rather than air). The main effect of Heliox usage is to transform turbulent flows into laminar flows. Heliox (20% Oxygen, 80% Helium) has approximately five times lower kinematic viscosity. For a given inhalation velocity, the Reynolds number is five times less than air. The objective of this study is to investigate the effect of Heliox flow in an oral airway through airflow characteristics and particle deposition with an oral airway model. Specifically, one normal condition with air is simulated, and this is compared using Heliox. Lagrangian tracking models were used to simulate the respiratory airflow and aerosol dynamics. Apparent discrepancies in airflow characteristics and aerosol distributions were observed by Heliox transport. Furthermore, Heliox flow compared to airflow gave a different aerosol pattern that was clearly suggestive to treat breathing problems. For any given breathing problem, Heliox persists for different particle sizes considered, even though their detailed distributions vary. Results of this study indicate that the use of Heliox led to less particles deposition due to the intrinsic properties of the gas phase. Heliox with inhaled aerosols appears to be non-invasive enough to be a practical tool for respiratory system, which may disclose clinically relevant clues about the severity of respiratory disease.

Development of a Novel ThreeDimensional Model to Study Breast Cancer Metastasis Bryanna Moppins Dr. Cheryl Gomillion, Chemical, Materials, and Biomedical Engineering, College of Engineering The mechanism behind breast cancer metastasis, or spreading, to patient bones is poorly understood. This may be attributed to the usage of traditional two-dimensional (2D) culture surfaces to study breast cancer cells, which lack structural properties of native tissues in the body. Tissues of