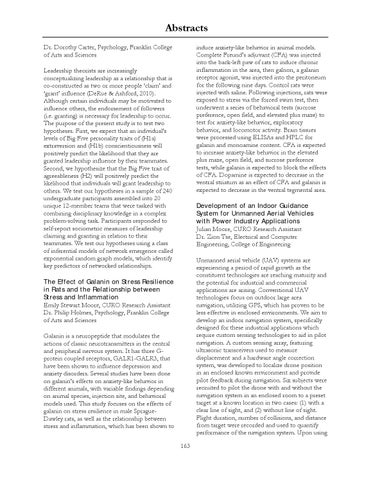 induce anxiety-like behavior in animal models. Complete Freund’s adjuvant (CFA) was injected into the back-left paw of rats to induce chronic inflammation in the area, then galnon, a galanin receptor agonist, was injected into the peritoneum for the following nine days. Control rats were injected with saline. Following injections, rats were exposed to stress via the forced swim test, then underwent a series of behavioral tests (sucrose preference, open field, and elevated plus maze) to test for anxiety-like behavior, exploratory behavior, and locomotor activity. Brain tissues were processed using ELISAs and HPLC for galanin and monoamine content. CFA is expected to increase anxiety-like behavior in the elevated plus maze, open field, and sucrose preference tests, while galanin is expected to block the effects of CFA. Dopamine is expected to decrease in the ventral striatum as an effect of CFA and galanin is expected to decrease in the ventral tegmental area.

Leadership theorists are increasingly conceptualizing leadership as a relationship that is co-constructed as two or more people ‘claim’ and ‘grant’ influence (DeRue &amp; Ashford, 2010). Although certain individuals may be motivated to influence others, the endorsement of followers (i.e. granting) is necessary for leadership to occur. The purpose of the present study is to test two hypotheses. First, we expect that an individual’s levels of Big Five personality traits of (H1a) extraversion and (H1b) conscientiousness will positively predict the likelihood that they are granted leadership influence by their teammates. Second, we hypothesize that the Big Five trait of agreeableness (H2) will positively predict the likelihood that individuals will grant leadership to others. We test our hypotheses in a sample of 240 undergraduate participants assembled into 20 unique 12-member teams that were tasked with combining disciplinary knowledge in a complex problem-solving task. Participants responded to self-report sociometric measures of leadership claiming and granting in relation to their teammates. We test our hypotheses using a class of inferential models of network emergence called exponential random graph models, which identify key predictors of networked relationships.

Development of an Indoor Guidance System for Unmanned Aerial Vehicles with Power Industry Applications Julian Moore, CURO Research Assistant Dr. Zion Tse, Electrical and Computer Engineering, College of Engineering Unmanned aerial vehicle (UAV) systems are experiencing a period of rapid growth as the constituent technologies are reaching maturity and the potential for industrial and commercial applications are arising. Conventional UAV technologies focus on outdoor large area navigation, utilizing GPS, which has proven to be less effective in enclosed environments. We aim to develop an indoor navigation system, specifically designed for these industrial applications which require custom sensing technologies to aid in pilot navigation. A custom sensing array, featuring ultrasonic transceivers used to measure displacement and a hardware angle correction system, was developed to localize drone position in an enclosed known environment and provide pilot feedback during navigation. Six subjects were recruited to pilot the drone with and without the navigation system in an enclosed room to a preset target at a known location in two cases: (1) with a clear line of sight, and (2) without line of sight. Flight duration, number of collisions, and distance from target were recorded and used to quantify performance of the navigation system. Upon using

The Effect of Galanin on Stress Resilience in Rats and the Relationship between Stress and Inflammation Emily Stewart Moore, CURO Research Assistant Dr. Philip Holmes, Psychology, Franklin College of Arts and Sciences Galanin is a neuropeptide that modulates the actions of classic neurotransmitters in the central and peripheral nervous system. It has three Gprotein coupled receptors, GALR1-GALR3, that have been shown to influence depression and anxiety disorders. Several studies have been done on galanin’s effects on anxiety-like behavior in different animals, with variable findings depending on animal species, injection site, and behavioral models used. This study focuses on the effects of galanin on stress resilience in male SpragueDawley rats, as well as the relationship between stress and inflammation, which has been shown to 163