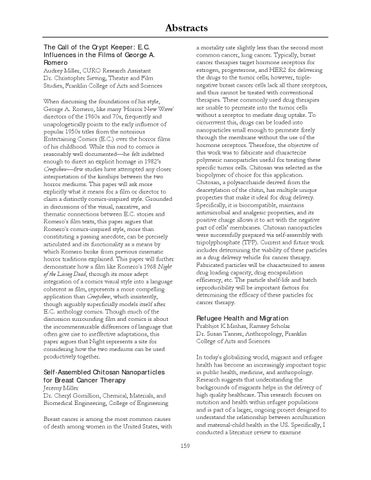 Abstracts a mortality rate slightly less than the second most common cancer, lung cancer. Typically, breast cancer therapies target hormone receptors for estrogen, progesterone, and HER2 for delivering the drugs to the tumor cells; however, triplenegative breast cancer cells lack all three receptors, and thus cannot be treated with conventional therapies. These commonly used drug therapies are unable to permeate into the tumor cells without a receptor to mediate drug uptake. To circumvent this, drugs can be loaded into nanoparticles small enough to permeate freely through the membrane without the use of the hormone receptors. Therefore, the objective of this work was to fabricate and characterize polymeric nanoparticles useful for treating these specific tumor cells. Chitosan was selected as the biopolymer of choice for this application. Chitosan, a polysaccharide derived from the deacetylation of the chitin, has multiple unique properties that make it ideal for drug delivery. Specifically, it is biocompatible, maintains antimicrobial and analgesic properties, and its positive charge allows it to act with the negative part of cells’ membranes. Chitosan nanoparticles were successfully prepared via self-assembly with tripolyphosphate (TPP). Current and future work includes determining the viability of these particles as a drug delivery vehicle for cancer therapy. Fabricated particles will be characterized to assess drug loading capacity, drug encapsulation efficiency, etc. The particle shelf-life and batch reproducibility will be important factors for determining the efficacy of these particles for cancer therapy.

The Call of the Crypt Keeper: E.C. Influences in the Films of George A. Romero Audrey Miller, CURO Research Assistant Dr. Christopher Sieving, Theatre and Film Studies, Franklin College of Arts and Sciences When discussing the foundations of his style, George A. Romero, like many &#39;Horror New Wave&#39; directors of the 1960s and 70s, frequently and unapologetically points to the early influence of popular 1950s titles from the notorious Entertaining Comics (E.C.) over the horror films of his childhood. While this nod to comics is reasonably well documented—he felt indebted enough to direct an explicit homage in 1982’s Creepshow—few studies have attempted any closer interpretation of the kinships between the two horror mediums. This paper will ask more explicitly what it means for a film or director to claim a distinctly comics-inspired style. Grounded in discussions of the visual, narrative, and thematic connections between E.C. stories and Romero&#39;s film texts, this paper argues that Romero&#39;s comics-inspired style, more than constituting a passing anecdote, can be precisely articulated and its functionality as a means by which Romero broke from previous cinematic horror traditions explained. This paper will further demonstrate how a film like Romero&#39;s 1968 Night of the Living Dead, through its more adept integration of a comics visual style into a language coherent as film, represents a more compelling application than Creepshow, which insistently, though arguably superficially models itself after E.C. anthology comics. Though much of the discussion surrounding film and comics is about the incommensurable differences of language that often give rise to ineffective adaptations, this paper argues that Night represents a site for considering how the two mediums can be used productively together.

Refugee Health and Migration Prabhjot K Minhas, Ramsey Scholar Dr. Susan Tanner, Anthropology, Franklin College of Arts and Sciences In today&#39;s globalizing world, migrant and refugee health has become an increasingly important topic in public health, medicine, and anthropology. Research suggests that understanding the backgrounds of migrants helps in the delivery of high quality healthcare. This research focuses on nutrition and health within refugee populations and is part of a larger, ongoing project designed to understand the relationship between acculturation and maternal-child health in the US. Specifically, I conducted a literature review to examine

Self-Assembled Chitosan Nanoparticles for Breast Cancer Therapy Jeremy Miller Dr. Cheryl Gomillion, Chemical, Materials, and Biomedical Engineering, College of Engineering Breast cancer is among the most common causes of death among women in the United States, with 159