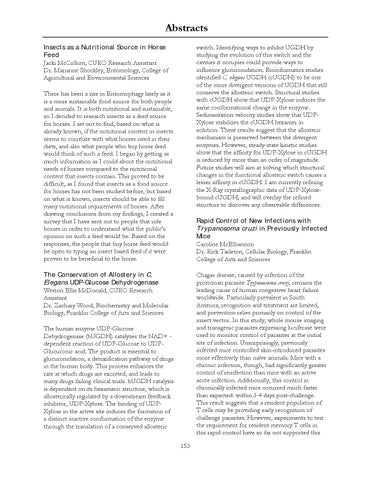 Abstracts switch. Identifying ways to inhibit UGDH by studying the evolution of this switch and the cavities it occupies could provide ways to influence glucuronidation. Bioinformatics studies identified C. elegans UGDH (cUGDH) to be one of the more divergent versions of UGDH that still conserve the allosteric switch. Structural studies with cUGDH show that UDP-Xylose induces the same conformational change in the enzyme. Sedimentation velocity studies show that UDPXylose stabilizes the cUGDH hexamer in solution. These results suggest that the allosteric mechanism is preserved between the divergent enzymes. However, steady-state kinetic studies show that the affinity for UDP-Xylose in cUGDH is reduced by more than an order of magnitude. Future studies will aim at solving which structural changes in the functional allosteric switch causes a lesser affinity in cUGDH. I am currently refining the X-Ray crystallographic data of UDP-Xylosebound cUGDH, and will overlay the refined structure to discover any observable differences.

Insects as a Nutritional Source in Horse Feed Jacki McCollum, CURO Research Assistant Dr. Marianne Shockley, Entomology, College of Agricultural and Environmental Sciences There has been a rise in Entomophagy lately as it is a more sustainable food source for both people and animals. It is both nutritional and sustainable, so I decided to research insects as a feed source for horses. I set out to find, based on what is already known, if the nutritional content in insects seems to correlate with what horses need in their diets, and also what people who buy horse feed would think of such a feed. I began by getting as much information as I could about the nutritional needs of horses compared to the nutritional content that insects contain. This proved to be difficult, as I found that insects as a food source for horses has not been studied before, but based on what is known, insects should be able to fill many nutritional requirements of horses. After drawing conclusions from my findings, I created a survey that I have sent out to people that ride horses in order to understand what the publicâ&amp;#x20AC;&amp;#x2122;s opinion on such a feed would be. Based on the responses, the people that buy horse feed would be open to trying an insect based feed if it were proven to be beneficial to the horse.

Chagas disease, caused by infection of the protozoan parasite Trypanosoma cruzi, remains the leading cause of human congestive heart failure worldwide. Particularly prevalent in South America, recognition and treatment are limited, and prevention relies primarily on control of the insect vector. In this study, whole mouse imaging and transgenic parasites expressing luciferase were used to monitor control of parasites at the initial site of infection. Unsurprisingly, previously infected mice controlled skin-introduced parasites more effectively than naĂŻve animals. Mice with a chronic infection, though, had significantly greater control of reinfection than mice with an active acute infection. Additionally, this control in chronically infected mice occurred much faster than expected: within 3-4 days post-challenge. This result suggests that a resident population of T cells may be providing early recognition of challenge parasites. However, experiments to test the requirement for resident memory T cells in this rapid control have so far not supported this

The human enzyme UDP-Glucose Dehydrogenase (hUGDH) catalyzes the NAD+ dependent reaction of UDP-Glucose to UDPGlucuronic acid. The product is essential to glucuronidation, a detoxification pathway of drugs in the human body. This process enhances the rate at which drugs are excreted, and leads to many drugs failing clinical trials. hUGDH catalysis is dependent on its hexameric structure, which is allosterically regulated by a downstream feedback inhibitor, UDP-Xylose. The binding of UDPXylose in the active site induces the formation of a distinct inactive conformation of the enzyme through the translation of a conserved allosteric 153