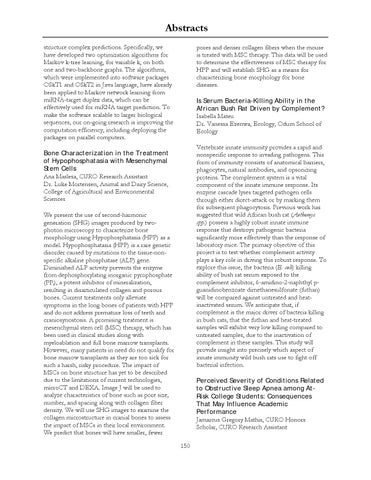 Abstracts structure complex predictions. Specifically, we have developed two optimization algorithms for Markov k-tree learning, for variable k, on both one and two-backbone graphs. The algorithms, which were implemented into software packages OSkT1 and OSkT2 in Java language, have already been applied to Markov network learning from miRNA-target duplex data, which can be effectively used for miRNA target prediction. To make the software scalable to larger biological sequences, our on-going research is improving the computation efficiency, including deploying the packages on parallel computers.

pores and denser collagen fibers when the mouse is treated with MSC therapy. This data will be used to determine the effectiveness of MSC therapy for HPP and will establish SHG as a means for characterizing bone morphology for bone diseases. Is Serum Bacteria-Killing Ability in the African Bush Rat Driven by Complement? Isabella Mateu Dr. Vanessa Ezenwa, Ecology, Odum School of Ecology Vertebrate innate immunity provides a rapid and nonspecific response to invading pathogens. This form of immunity consists of anatomical barriers, phagocytes, natural antibodies, and opsonizing proteins. The complement system is a vital component of the innate immune response. Its enzyme cascade lyses targeted pathogen cells through either direct-attack or by marking them for subsequent phagocytosis. Previous work has suggested that wild African bush rat (Aethomys spp.) possess a highly robust innate immune response that destroys pathogenic bacteria significantly more effectively than the response of laboratory mice. The primary objective of this project is to test whether complement activity plays a key role in driving this robust response. To explore this issue, the bacteria (E. coli) killing ability of bush rat serum exposed to the complement inhibitor, 6-amidino-2-naphthyl pguanidinobenzoate dimethanesulfonate (futhan) will be compared against untreated and heatinactivated serum. We anticipate that, if complement is the major driver of bacteria killing in bush rats, that the futhan and heat-treated samples will exhibit very low killing compared to untreated samples, due to the inactivation of complement in these samples. This study will provide insight into precisely which aspect of innate immunity wild bush rats use to fight off bacterial infection.

Bone Characterization in the Treatment of Hypophosphatasia with Mesenchymal Stem Cells Ana Maslesa, CURO Research Assistant Dr. Luke Mortensen, Animal and Dairy Science, College of Agricultural and Environmental Sciences We present the use of second-harmonic generation (SHG) images produced by twophoton microscopy to characterize bone morphology using Hypophosphatasia (HPP) as a model. Hypophosphatasia (HPP) is a rare genetic disorder caused by mutations to the tissue-nonspecific alkaline phosphatase (ALP) gene. Diminished ALP activity prevents the enzyme from dephosphorylating inorganic pyrophosphate (PPi), a potent inhibitor of mineralization, resulting in disarticulated collagen and porous bones. Current treatments only alleviate symptoms in the long bones of patients with HPP and do not address premature loss of teeth and craniosynostosis. A promising treatment is mesenchymal stem cell (MSC) therapy, which has been used in clinical studies along with myeloablation and full bone marrow transplants. However, many patients in need do not qualify for bone marrow transplants as they are too sick for such a harsh, risky procedure. The impact of MSCs on bone structure has yet to be described due to the limitations of current technologies, microCT and DEXA. Image J will be used to analyze characteristics of bone such as pore size, number, and spacing along with collagen fiber density. We will use SHG images to examine the collagen microstructure in cranial bones to assess the impact of MSCs in their local environment. We predict that bones will have smaller, fewer