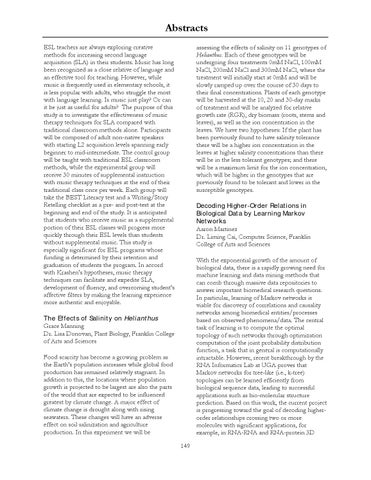 Abstracts ESL teachers are always exploring creative methods for increasing second language acquisition (SLA) in their students. Music has long been recognized as a close relative of language and an effective tool for teaching. However, while music is frequently used in elementary schools, it is less popular with adults, who struggle the most with language learning. Is music just play? Or can it be just as useful for adults? The purpose of this study is to investigate the effectiveness of music therapy techniques for SLA compared with traditional classroom methods alone. Participants will be composed of adult non-native speakers with starting L2 acquisition levels spanning early beginner to mid-intermediate. The control group will be taught with traditional ESL classroom methods, while the experimental group will receive 30 minutes of supplemental instruction with music therapy techniques at the end of their traditional class once per week. Each group will take the BEST Literacy test and a Writing/Story Retelling checklist as a pre- and post-test at the beginning and end of the study. It is anticipated that students who receive music as a supplemental portion of their ESL classes will progress more quickly through their ESL levels than students without supplemental music. This study is especially significant for ESL programs whose funding is determined by their retention and graduation of students the program. In accord with Krashenâ&amp;#x20AC;&amp;#x2122;s hypotheses, music therapy techniques can facilitate and expedite SLA, development of fluency, and overcoming studentâ&amp;#x20AC;&amp;#x2122;s affective filters by making the learning experience more authentic and enjoyable.

assessing the effects of salinity on 11 genotypes of Helianthus. Each of these genotypes will be undergoing four treatments 0mM NaCl, 100mM NaCl, 200mM NaCl and 300mM NaCl, where the treatment will initially start at 0mM and will be slowly ramped up over the course of 30 days to their final concentrations. Plants of each genotype will be harvested at the 10, 20 and 30-day marks of treatment and will be analyzed for relative growth rate (RGR), dry biomass (roots, stems and leaves), as well as the ion concentration in the leaves. We have two hypotheses: If the plant has been previously found to have salinity tolerance there will be a higher ion concentration in the leaves at higher salinity concentrations than there will be in the less tolerant genotypes; and there will be a maximum limit for the ion concentration, which will be higher in the genotypes that are previously found to be tolerant and lower in the susceptible genotypes. Decoding Higher-Order Relations in Biological Data by Learning Markov Networks Aaron Martinez Dr. Liming Cai, Computer Science, Franklin College of Arts and Sciences With the exponential growth of the amount of biological data, there is a rapidly growing need for machine learning and data mining methods that can comb through massive data repositories to answer important biomedical research questions. In particular, learning of Markov networks is viable for discovery of correlations and causality networks among biomedical entities/processes based on observed phenomena/data. The central task of learning is to compute the optimal topology of such networks through optimization computation of the joint probability distribution function, a task that in general is computationally intractable. However, recent breakthrough by the RNA Informatics Lab at UGA proves that Markov networks for tree-like (i.e., k-tree) topologies can be learned efficiently from biological sequence data, leading to successful applications such as bio-molecular structure prediction. Based on this work, the current project is progressing toward the goal of decoding higherorder relationships crossing two or more molecules with significant applications, for example, in RNA-RNA and RNA-protein 3D

The Effects of Salinity on Helianthus Grace Manning Dr. Lisa Donovan, Plant Biology, Franklin College of Arts and Sciences Food scarcity has become a growing problem as the Earthâ&amp;#x20AC;&amp;#x2122;s population increases while global food production has remained relatively stagnant. In addition to this, the locations where population growth is projected to be largest are also the parts of the world that are expected to be influenced greatest by climate change. A major effect of climate change is drought along with rising seawaters. These changes will have an adverse effect on soil salinization and agriculture production. In this experiment we will be 149