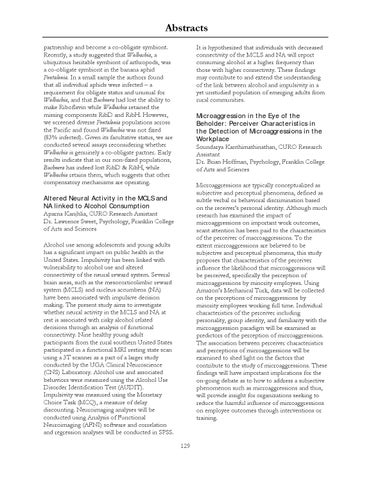 Abstracts partnership and become a co-obligate symbiont. Recently, a study suggested that Wolbachia, a ubiquitous heritable symbiont of arthropods, was a co-obligate symbiont in the banana aphid Pentalonia. In a small sample the authors found that all individual aphids were infected – a requirement for obligate status and unusual for Wolbachia, and that Buchnera had lost the ability to make Riboflavin while Wolbachia retained the missing components RibD and RibH. However, we screened diverse Pentalonia populations across the Pacific and found Wolbachia was not fixed (83% infected). Given its facultative status, we are conducted several assays reconsidering whether Wolbachia is genuinely a co-obligate partner. Early results indicate that in our non-fixed populations, Buchnera has indeed lost RibD &amp; RibH, while Wolbachia retains them, which suggests that other compensatory mechanisms are operating.

Altered Neural Activity in the MCLS and NA linked to Alcohol Consumption Aparna Kanjhlia, CURO Research Assistant Dr. Lawrence Sweet, Psychology, Franklin College of Arts and Sciences Alcohol use among adolescents and young adults has a significant impact on public health in the United States. Impulsivity has been linked with vulnerability to alcohol use and altered connectivity of the neural reward system. Several brain areas, such as the mesocorticolimbic reward system (MCLS) and nucleus accumbens (NA) have been associated with impulsive decision making. The present study aims to investigate whether neural activity in the MCLS and NA at rest is associated with risky alcohol related decisions through an analysis of functional connectivity. Nine healthy young adult participants from the rural southern United States participated in a functional MRI resting state scan using a 3T scanner as a part of a larger study conducted by the UGA Clinical Neuroscience (CNS) Laboratory. Alcohol use and associated behaviors were measured using the Alcohol Use Disorder Identification Test (AUDIT). Impulsivity was measured using the Monetary Choice Task (MCQ), a measure of delay discounting. Neuroimaging analyses will be conducted using Analysis of Functional Neuroimaging (AFNI) software and correlation and regression analyses will be conducted in SPSS. 129