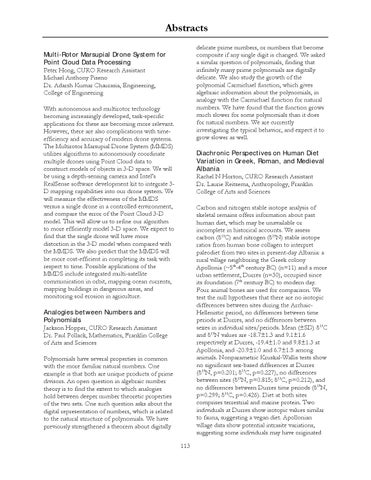 Abstracts delicate prime numbers, or numbers that become composite if any single digit is changed. We asked a similar question of polynomials, finding that infinitely many prime polynomials are digitally delicate. We also study the growth of the polynomial Carmichael function, which gives algebraic information about the polynomials, in analogy with the Carmichael function for natural numbers. We have found that the function grows much slower for some polynomials than it does for natural numbers. We are currently investigating the typical behavior, and expect it to grow slower as well.

Multi-Rotor Marsupial Drone System for Point Cloud Data Processing Peter Hong, CURO Research Assistant Michael Anthony Piseno Dr. Adarsh Kumar Chaurasia, Engineering, College of Engineering With autonomous and multirotor technology becoming increasingly developed, task-specific applications for these are becoming more relevant. However, there are also complications with timeefficiency and accuracy of modern drone systems. The Multirotor Marsupial Drone System (MMDS) utilizes algorithms to autonomously coordinate multiple drones using Point Cloud data to construct models of objects in 3-D space. We will be using a depth-sensing camera and Intel’s RealSense software development kit to integrate 3D mapping capabilities into our drone system. We will measure the effectiveness of the MMDS versus a single drone in a controlled environment, and compare the error of the Point Cloud 3-D model. This will allow us to refine our algorithm to more efficiently model 3-D space. We expect to find that the single drone will have more distortion in the 3-D model when compared with the MMDS. We also predict that the MMDS will be more cost-efficient in completing its task with respect to time. Possible applications of the MMDS include integrated multi-satellite communication in orbit, mapping ocean currents, mapping buildings in dangerous areas, and monitoring soil erosion in agriculture.

Diachronic Perspectives on Human Diet Variation in Greek, Roman, and Medieval Albania Rachel N Horton, CURO Research Assistant Dr. Laurie Reitsema, Anthropology, Franklin College of Arts and Sciences Carbon and nitrogen stable isotope analysis of skeletal remains offers information about past human diet, which may be unavailable or incomplete in historical accounts. We assess carbon (δ13C) and nitrogen (δ15N) stable isotope ratios from human bone collagen to interpret paleodiet from two sites in present-day Albania: a rural village neighboring the Greek colony Apollonia (~5th-4th century BC) (n=11) and a more urban settlement, Durres (n=30), occupied since its foundation (7th century BC) to modern day. Four animal bones are used for comparison. We test the null hypotheses that there are no isotopic differences between sites during the ArchaicHellenistic period, no differences between time periods at Durres, and no differences between sexes in individual sites/periods. Mean (±SD) δ13C and δ15N values are -18.7±1.3 and 9.1±1.6 respectively at Durres, -19.4±1.0 and 9.8±1.3 at Apollonia, and -20.9±1.0 and 6.7±1.5 among animals. Nonparametric Kruskal-Wallis tests show no significant sex-based differences at Durres (δ15N, p=0.201; δ13C, p=0.227), no differences between sites (δ15N, p=0.815; δ13C, p=0.212), and no differences between Durres time periods (δ15N, p=0.299; δ13C, p=0.426). Diet at both sites comprises terrestrial and marine protein. Two individuals at Durres show isotopic values similar to fauna, suggesting a vegan diet. Apollonian village data show potential intrasite variations, suggesting some individuals may have originated

Analogies between Numbers and Polynomials Jackson Hopper, CURO Research Assistant Dr. Paul Pollack, Mathematics, Franklin College of Arts and Sciences Polynomials have several properties in common with the more familiar natural numbers. One example is that both are unique products of prime divisors. An open question in algebraic number theory is to find the extent to which analogies hold between deeper number theoretic properties of the two sets. One such question asks about the digital representation of numbers, which is related to the natural structure of polynomials. We have previously strengthened a theorem about digitally 113