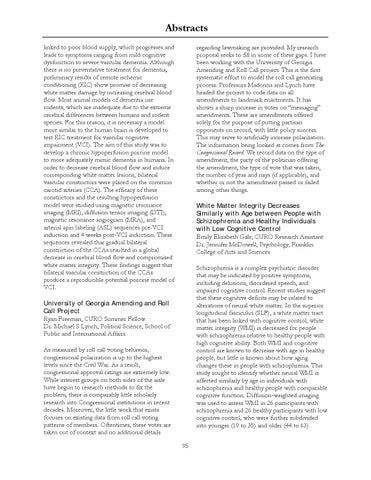 Abstracts linked to poor blood supply, which progresses and leads to symptoms ranging from mild cognitive dysfunction to severe vascular dementia. Although there is no preventative treatment for dementia, preliminary results of remote ischemic conditioning (RIC) show promise of decreasing white matter damage by increasing cerebral blood flow. Most animal models of dementia use rodents, which are inadequate due to the extreme cerebral differences between humans and rodent species. For this reason, it is necessary a model more similar to the human brain is developed to test RIC treatment for vascular cognitive impairment (VCI). The aim of this study was to develop a chronic hypoperfusion porcine model to more adequately mimic dementia in humans. In order to decrease cerebral blood flow and induce corresponding white matter lesions, bilateral vascular constrictors were placed on the common carotid arteries (CCA). The efficacy of these constrictors and the resulting hypoperfusion model were studied using magnetic resonance imaging (MRI), diffusion tensor imaging (DTI), magnetic resonance angiogram (MRA), and arterial spin labeling (ASL) sequences pre-VCI induction and 4 weeks post-VCI induction. These sequences revealed thar gradual bilateral constriction of the CCAs resulted in a global decrease in cerebral blood flow and compromised white matter integrity. These findings suggest that bilateral vascular constriction of the CCAs produce a reproducible potential porcine model of VCI.

regarding lawmaking are provided. My research proposal seeks to fill in some of these gaps. I have been working with the University of Georgia Amending and Roll Call project. This is the first systematic effort to model the roll call generating process. Professors Madonna and Lynch have headed the project to code data on all amendments to landmark enactments. It has shown a sharp increase in votes on â&amp;#x20AC;&amp;#x153;messagingâ&amp;#x20AC;? amendments. These are amendments offered solely for the purpose of putting partisan opponents on record, with little policy success. This may serve to artificially increase polarization. The information being looked at comes from The Congressional Record. We record data on the type of amendment, the party of the politician offering the amendment, the type of vote that was taken, the number of yeas and nays (if applicable), and whether or not the amendment passed or failed among other things. White Matter Integrity Decreases Similarly with Age between People with Schizophrenia and Healthy Individuals with Low Cognitive Control Emily Elizabeth Gale, CURO Research Assistant Dr. Jennifer McDowell, Psychology, Franklin College of Arts and Sciences Schizophrenia is a complex psychiatric disorder that may be indicated by positive symptoms, including delusions, disordered speech, and impaired cognitive control. Recent studies suggest that these cognitive deficits may be related to alterations of neural white matter. In the superior longitudinal fasciculus (SLF), a white matter tract that has been linked with cognitive control, white matter integrity (WMI) is decreased for people with schizophrenia relative to healthy people with high cognitive ability. Both WMI and cognitive control are known to decrease with age in healthy people, but little is known about how aging changes these in people with schizophrenia. This study sought to identify whether neural WMI is affected similarly by age in individuals with schizophrenia and healthy people with comparable cognitive function. Diffusion-weighted imaging was used to assess WMI in 26 participants with schizophrenia and 26 healthy participants with low cognitive control, who were further subdivided into younger (19 to 35) and older (44 to 63)

University of Georgia Amending and Roll Call Project Ryan Freeman, CURO Summer Fellow Dr. Michael S Lynch, Political Science, School of Public and International Affairs As measured by roll call voting behavior, congressional polarization is up to the highest levels since the Civil War. As a result, congressional approval ratings are extremely low. While interest groups on both sides of the aisle have begun to research methods to fix the problem, there is comparably little scholarly research into Congressional institutions in recent decades. Moreover, the little work that exists focuses on existing data from roll call voting patterns of members. Oftentimes, these votes are taken out of context and no additional details 95