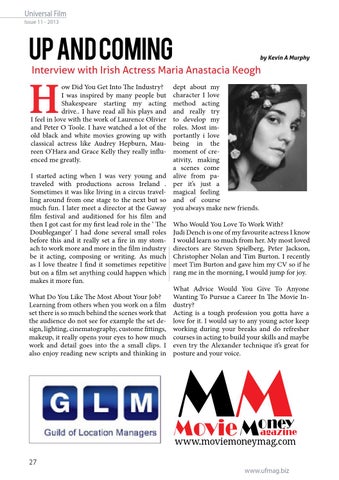 by Kevin A Murphy

ow Did You Get Into The Industry? I was inspired by many people but Shakespeare starting my acting drive.. I have read all his plays and I feel in love with the work of Laurence Olivier and Peter O Toole. I have watched a lot of the old black and white movies growing up with classical actress like Audrey Hepburn, Maureen O’Hara and Grace Kelly they really influenced me greatly.

I started acting when I was very young and traveled with productions across Ireland . Sometimes it was like living in a circus travelling around from one stage to the next but so much fun. I later meet a director at the Gaway film festival and auditioned for his film and then I got cast for my first lead role in the ‘ The Doubleganger’ I had done several small roles before this and it really set a fire in my stomach to work more and more in the film industry be it acting, composing or writing. As much as I love theatre I find it sometimes repetitive but on a film set anything could happen which makes it more fun. What Do You Like The Most About Your Job? Learning from others when you work on a film set there is so much behind the scenes work that the audience do not see for example the set design, lighting, cinematography, custome fittings, makeup, it really opens your eyes to how much work and detail goes into the a small clips. I also enjoy reading new scripts and thinking in

dept about my character I love method acting and really try to develop my roles. Most importantly i love being in the moment of creativity, making a scenes come alive from paper it’s just a magical feeling and of course you always make new friends. Who Would You Love To Work With? Judi Dench is one of my favourite actress I know I would learn so much from her. My most loved directors are Steven Spielberg, Peter Jackson, Christopher Nolan and Tim Burton. I recently meet Tim Burton and gave him my CV so if he rang me in the morning, I would jump for joy. What Advice Would You Give To Anyone Wanting To Pursue a Career In The Movie Industry? Acting is a tough profession you gotta have a love for it. I would say to any young actor keep working during your breaks and do refresher courses in acting to build your skills and maybe even try the Alexander technique it’s great for posture and your voice. 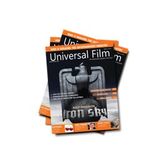