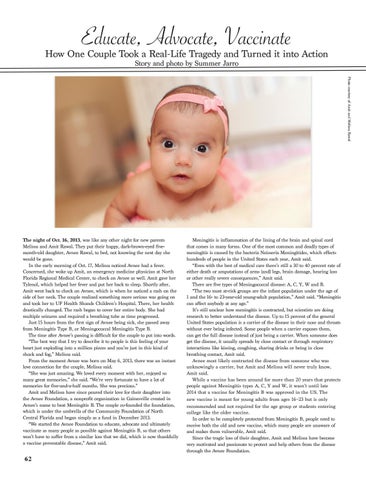 The night of Oct. 16, 2013, was like any other night for new parents Melissa and Amit Rawal. They put their happy, dark-brown-eyed fivemonth-old daughter, Avnee Rawal, to bed, not knowing the next day she would be gone. In the early morning of Oct. 17, Melissa noticed Avnee had a fever. Concerned, she woke up Amit, an emergency medicine physician at North Florida Regional Medical Center, to check on Avnee as well. Amit gave her Tylenol, which helped her fever and put her back to sleep. Shortly after, Amit went back to check on Avnee, which is when he noticed a rash on the side of her neck. The couple realized something more serious was going on and took her to UF Health Shands Children’s Hospital. There, her health drastically changed. The rash began to cover her entire body. She had multiple seizures and required a breathing tube as time progressed. Just 15 hours from the first sign of Avnee being sick, she passed away from Meningitis Type B, or Meningococcal Meningitis Type B. The time after Avnee’s passing is difficult for the couple to put into words. “The best way that I try to describe it to people is this feeling of your heart just exploding into a million pieces and you’re just in this kind of shock and fog,” Melissa said. From the moment Avnee was born on May 6, 2013, there was an instant love connection for the couple, Melissa said. “She was just amazing. We loved every moment with her, enjoyed so many great memories,” she said. “We’re very fortunate to have a lot of memories for five-and-a-half months. She was precious.” Amit and Melissa have since poured their love for their daughter into the Avnee Foundation, a nonprofit organization in Gainesville created in Avnee’s name to beat Meningitis B. The couple co-founded the foundation, which is under the umbrella of the Community Foundation of North Central Florida and began simply as a fund in December 2013. “We started the Avnee Foundation to educate, advocate and ultimately vaccinate as many people as possible against Meningitis B, so that others won’t have to suffer from a similar loss that we did, which is now thankfully a vaccine preventable disease,” Amit said.

Meningitis is inflammation of the lining of the brain and spinal cord that comes in many forms. One of the most common and deadly types of meningitis is caused by the bacteria Neisseria Meningitides, which effects hundreds of people in the United States each year, Amit said. “Even with the best of medical care there’s still a 30 to 40 percent rate of either death or amputations of arms [and] legs, brain damage, hearing loss or other really severe consequences,” Amit said. There are five types of Meningococcal disease: A, C, Y, W and B. “The two most at-risk groups are the infant population under the age of 1 and the 16- to 23-year-old young-adult population,” Amit said. “Meningitis can affect anybody at any age.” It’s still unclear how meningitis is contracted, but scientists are doing research to better understand the disease. Up to 15 percent of the general United States population is a carrier of the disease in their nose and throats without ever being infected. Some people when a carrier exposes them, can get the full disease instead of just being a carrier. When someone does get the disease, it usually spreads by close contact or through respiratory interactions like kissing, coughing, sharing drinks or being in close breathing contact, Amit said. Avnee most likely contracted the disease from someone who was unknowingly a carrier, but Amit and Melissa will never truly know, Amit said. While a vaccine has been around for more than 20 years that protects people against Meningitis types A, C, Y and W, it wasn’t until late 2014 that a vaccine for Meningitis B was approved in the US. The new vaccine is meant for young adults from ages 16–23 but is only recommended and not required for the age group or students entering college like the older vaccine. In order to be completely protected from Meningitis B, people need to receive both the old and new vaccine, which many people are unaware of and makes them vulnerable, Amit said. Since the tragic loss of their daughter, Amit and Melissa have become very motivated and passionate to protect and help others from the disease through the Avnee Foundation. 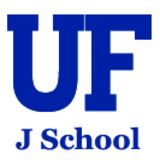 Orange & Blue is a student-run magazine produced by students enrolled in Applied Magazines at the UF College of Journalism and Communication...

Orange & Blue is a student-run magazine produced by students enrolled in Applied Magazines at the UF College of Journalism and Communication...