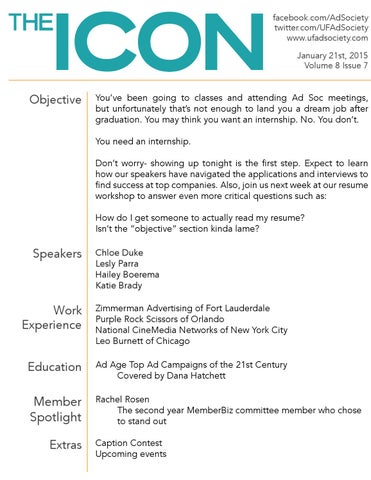 You’ve been going to classes and attending Ad Soc meetings, but unfortunately that’s not enough to land you a dream job after graduation. You may think you want an internship. No. You don’t. You need an internship. Don’t worry- showing up tonight is the first step. Expect to learn how our speakers have navigated the applications and interviews to find success at top companies. Also, join us next week at our resume workshop to answer even more critical questions such as: How do I get someone to actually read my resume? Isn’t the “objective” section kinda lame?

The Start of a Century The average American sees about 5,000 ads a day, and as many as us know, not every one of them is memorable. At worst, they can be memorably terrible. However, the past 15 years have shown us that the industry we have chosen to one day be a part of professionally can create campaigns that can truly shape our lives, just as it’s done during the previous century. With all these great brand personalities flourishing, it’s tough to choose a few favorites; fortunately, we have Ad Age. The magazine first nominated 50 campaigns to be considered as the top of the 21st century and on January 12th definitively picked the best 15. Yet one Ad Soc member decided to challenge it. Dana Hatchett, sophomore, carefully went through each nominee and found her two favorites. All of the ad campaigns nominated for “Top Ad Campaigns of the 21st Century” managed to do one thing: they grabbed the attention of their audience with trendsetting innovation and creativity. However, there can only be room for one winner. Regardless of whom Ad Age chooses, I am going to have to nominate Chipotle’s “Back to the Start” campaign as the best ad campaign of the 21st century. This campaign raised the bar for the quality of food in the food industry. Customers want to trust the freshness of the food they consume, and Chipotle proved to consumers they were serving the freshest ingredients available. Recently, several Chipotle stores stopped serving pork after discovering one of their pig suppliers was consistently falling below their standards. Forgoing pork proved to the public that Chipotle does, in fact, live up to the message of its innovative campaign. Other restaurant chains now find themselves in a rut, trying unsuccessfully to claim their ingredients are fresher than Chipotle’s. But with Chipotle’s squeaky-clean reputation, that will likely be hard to prove. The campaign that closely trailed behind Chipotle’s campaign, in my opinion, was the Nike Plus campaign. I remember being in high school when this campaign originally aired. All of the kids at my school, including myself, wanted a techsavvy pair of lightweight Nike shoes. Nike’s effort to combine sports with technology forever changed the way my generation viewed modern, sophisticated sportswear. As a high school athlete, this campaign had a huge impact on my life. With Nike’s products, I was able to look stylish as advanced technology kept track of my workouts and helped me maintain good health habits.

Member Spotlight: Rachel Rosen Rachel Rosen, a second year advertising and management major, knows what it takes to become a role model and leader. She’s not only a member of Delta Epsilon Iota, a crucial part of the MemberBiz committee within Ad Society, but was also the marketing strategy intern for Sportody.com just last fall. There she organized meetings with campus club in order to increase brand awareness, Ad Society among the many. Beyond acing managerial accounting and exploring San Fransisco with her best friend over spring break, her long term goal is to work her way up a huge international corporation, starting with, she hopes, an internship at one this summer. However, Rachel knows inspiration can come from even the smallest of businesses. “Air Around the Clock,” a maintenance company in South Florida, ran a campaign that caught her eye. “They have billboards all over the area with their logo next to ‘Your wife is hot. Better get your AC fixed.’ I think it’s clever and it always makes me chuckle.” Congrats, Rachel!

Advice from the (Semi)Pros Chloe Duke Zimmerman Advertising I was the digital intern, so I was responsible for all things digital. My main job was creating social media calendars and messaging docs for clients like Dunkin’ Donuts, White Castle, and Party City, but I also was responsible for creating a digital/social campaign promoting Zimmerman’s InfuZion Internship Program. Everything is a learning experience. I made sure that during my internship I sat in on every meeting, brainstorm, and training session, and I absorbed so much more from actually partaking in different agency activities rather than just hearing about them. Also, I learned that asking for evaluations of your performance is a great way to get advice from experienced professionals and show your dedication to bettering yourself. My efforts to improve helped me win InfuZion Intern of the Year!

Lesly Parra Purple Rock Scissors I actually now work for PRPL remotely from Gainesville and I handle 2 accounts in which I am responsible for integrated strategy and all content creation. The most important thing that I have learned so far is making connections with all of your colleagues. I have been extremely lucky to create opportunities where I have learned much more than social media but got to learn from experts in all the different departments.

Hailey Boerema National CineMedia networks Although my title was a marketing intern, I worked within every department of the New York office, ranging from entertainment marketing, where I worked with making copromotional advertisements with upcoming movies and brands, regional marketing, helping manage all the different regional account directors that work nationally, and national marketing, creating pitches to national clients for various ads through our national media network. I also specifically handled an Applebee’s account, made an entire national campaign pitch, and it sold in real life! I worked within the NYC office, but the entire company spanned across six different main offices, within different time zones. Although I was aside two other interns, I also interned with a person in Denver, LA, and Chicago. Not only did I learn a lot about teamwork and communication, in person and digitally, but I took a leadership role within the team and learned a lot about delegation and organization. Our client pitch was presented to a 40+ person group of execs, so I also learned how to picture a lot of important people in their underwear.

Katie Brady Leo Burnett I was an account management intern, which entailed a lot of meetings, overseeing agendas and presentations, meeting with clients and sometimes helping with research (but I think that was just because my team was kind of small). Basically, I was just “team mom” for three months- and I loved it! I learned a lot, but the biggest thing I learned was to “slow down and listen.” I’m very taskoriented so I usually rush through my checklist of things to do. But this internship really reminded me that better work comes from taking your time and perfecting the process.