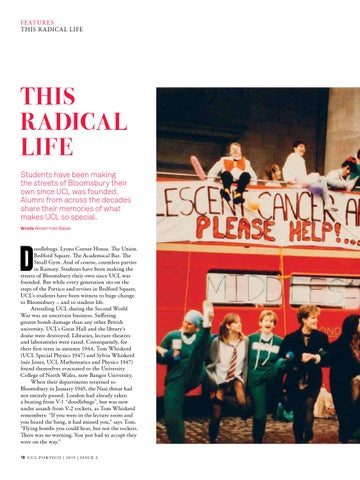 FE ATUR ES THIS R A DIC A L LIFE

THIS RADICAL LIFE Students have been making the streets of Bloomsbury their own since UCL was founded. Alumni from across the decades share their memories of what makes UCL so special. Words Wiliam Ham Bevan

oodlebugs. Lyons Corner House. The Union. Bedford Square. The Academical Bar. The Small Gym. And of course, countless parties in Ramsey. Students have been making the streets of Bloomsbury their own since UCL was founded. But while every generation sits on the steps of the Portico and revises in Bedford Square, UCL’s students have been witness to huge change to Bloomsbury – and to student life. Attending UCL during the Second World War was an uncertain business. Suffering greater bomb damage than any other British university, UCL’s Great Hall and the library’s dome were destroyed. Libraries, lecture theatres and laboratories were razed. Consequently, for their first term in autumn 1944, Tom Whiskerd (UCL Special Physics 1947) and Sylvia Whiskerd (née Jones, UCL Mathematics and Physics 1947) found themselves evacuated to the University College of North Wales, now Bangor University. When their departments returned to Bloomsbury in January 1945, the Nazi threat had not entirely passed. London had already taken a beating from V-1 “doodlebugs”, but was now under assault from V-2 rockets, as Tom Whiskerd remembers: “If you were in the lecture room and you heard the bang, it had missed you,” says Tom. “Flying bombs you could hear, but not the rockets. There was no warning. You just had to accept they were on the way.” 18 U C L P O R T I C O | 2 015 | I S S U E 2