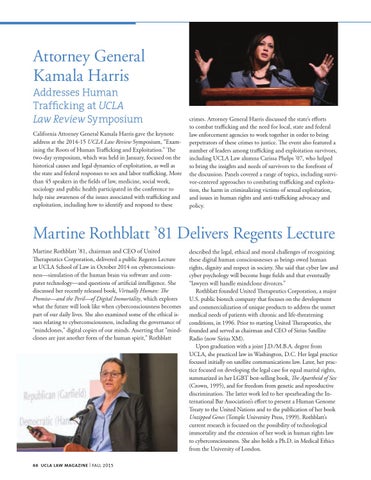 California Attorney General Kamala Harris gave the keynote address at the 2014-15 UCLA Law Review Symposium, “Examining the Roots of Human Trafficking and Exploitation.” The two-day symposium, which was held in January, focused on the historical causes and legal dynamics of exploitation, as well as the state and federal responses to sex and labor trafficking. More than 45 speakers in the fields of law, medicine, social work, sociology and public health participated in the conference to help raise awareness of the issues associated with trafficking and exploitation, including how to identify and respond to these

crimes. Attorney General Harris discussed the state’s efforts to combat trafficking and the need for local, state and federal law enforcement agencies to work together in order to bring perpetrators of these crimes to justice. The event also featured a number of leaders among trafficking and exploitation survivors, including UCLA Law alumna Carissa Phelps ’07, who helped to bring the insights and needs of survivors to the forefront of the discussion. Panels covered a range of topics, including survivor-centered approaches to combating trafficking and exploitation, the harm in criminalizing victims of sexual exploitation, and issues in human rights and anti-trafficking advocacy and policy.

Martine Rothblatt ’81 Delivers Regents Lecture Martine Rothblatt ’81, chairman and CEO of United Therapeutics Corporation, delivered a public Regents Lecture at UCLA School of Law in October 2014 on cyberconsciousness—simulation of the human brain via software and computer technology—and questions of artificial intelligence. She discussed her recently released book, Virtually Human: The Promise—and the Peril—of Digital Immortality, which explores what the future will look like when cyberconsciousness becomes part of our daily lives. She also examined some of the ethical issues relating to cyberconsciousness, including the governance of “mindclones,” digital copies of our minds. Asserting that “mindclones are just another form of the human spirit,” Rothblatt

described the legal, ethical and moral challenges of recognizing these digital human consciousnesses as beings owed human rights, dignity and respect in society. She said that cyber law and cyber psychology will become huge fields and that eventually “lawyers will handle mindclone divorces.” Rothblatt founded United Therapeutics Corporation, a major U.S. public biotech company that focuses on the development and commercialization of unique products to address the unmet medical needs of patients with chronic and life-threatening conditions, in 1996. Prior to starting United Therapeutics, she founded and served as chairman and CEO of Sirius Satellite Radio (now Sirius XM). Upon graduation with a joint J.D./M.B.A. degree from UCLA, she practiced law in Washington, D.C. Her legal practice focused initially on satellite communications law. Later, her practice focused on developing the legal case for equal marital rights, summarized in her LGBT best-selling book, The Apartheid of Sex (Crown, 1995), and for freedom from genetic and reproductive discrimination. The latter work led to her spearheading the International Bar Association’s effort to present a Human Genome Treaty to the United Nations and to the publication of her book Unzipped Genes (Temple University Press, 1999). Rothblatt’s current research is focused on the possibility of technological immortality and the extension of her work in human rights law to cyberconsciousness. She also holds a Ph.D. in Medical Ethics from the University of London.