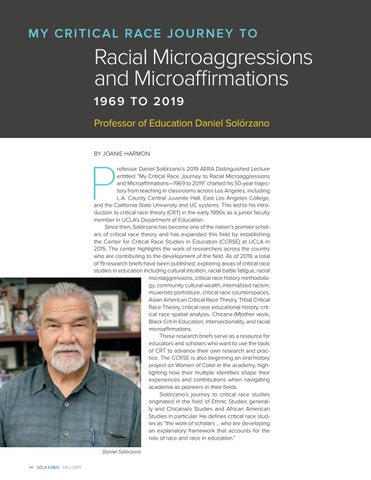 rofessor Daniel Solórzano’s 2019 AERA Distinguished Lecture entitled “My Critical Race Journey to Racial Microaggressions and Microaffirmations—1969 to 2019” charted his 50-year trajectory from teaching in classrooms across Los Angeles, including L.A. County Central Juvenile Hall, East Los Angeles College, and the California State University and UC systems. This led to his introduction to critical race theory (CRT) in the early 1990s as a junior faculty member in UCLA’s Department of Education. Since then, Solórzano has become one of the nation’s premier scholars of critical race theory and has expanded this field by establishing the Center for Critical Race Studies in Education (CCRSE) at UCLA in 2015. The center highlights the work of researchers across the country who are contributing to the development of the field. As of 2019, a total of 19 research briefs have been published, exploring areas of critical race studies in education including cultural intuition, racial battle fatigue, racial microaggressions, critical race history methodology, community cultural wealth, internalized racism, muxerista portraiture, critical race counterspaces, Asian American Critical Race Theory, Tribal Critical Race Theory, critical race educational history, critical race spatial analysis, Chicana (M)other work, Black Crit in Education, intersectionality, and racial microaffirmations. These research briefs serve as a resource for educators and scholars who want to use the tools of CRT to advance their own research and practice. The CCRSE is also beginning an oral history project on Women of Color in the academy, highlighting how their multiple identities shape their experiences and contributions when navigating academia as pioneers in their fields. Solórzano’s journey to critical race studies originated in the field of Ethnic Studies generally and Chicana/o Studies and African American Studies in particular. He defines critical race studies as “the work of scholars … who are developing an explanatory framework that accounts for the role of race and race in education.” Daniel Solórzano The UCLA Graduate School of Education and Information Studies’ magazine highlights the public scholarship of our faculty. In this issue, we...

The UCLA Graduate School of Education and Information Studies’ magazine highlights the public scholarship of our faculty. In this issue, we...