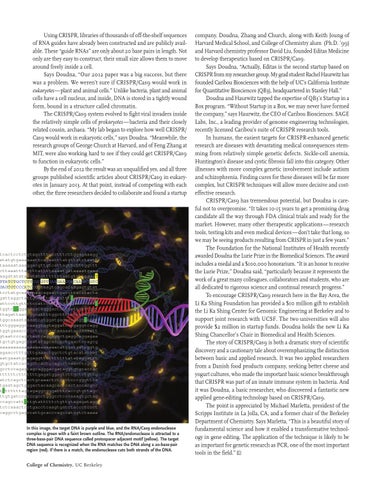 Using CRISPR, libraries of thousands of off-the-shelf sequences of RNA guides have already been constructed and are publicly available. These “guide RNAs” are only about 20 base pairs in length. Not only are they easy to construct, their small size allows them to move around freely inside a cell. Says Doudna, “Our 2012 paper was a big success, but there was a problem. We weren’t sure if CRISPR/Cas9 would work in eukaryotes—plant and animal cells.” Unlike bacteria, plant and animal cells have a cell nucleus, and inside, DNA is stored in a tightly wound form, bound in a structure called chromatin. The CRISPR/Cas9 system evolved to fight viral invaders inside the relatively simple cells of prokaryotes—bacteria and their closely related cousin, archaea. “My lab began to explore how well CRISPR/ Cas9 would work in eukaryotic cells,” says Doudna. “Meanwhile, the research groups of George Church at Harvard, and of Feng Zhang at MIT, were also working hard to see if they could get CRISPR/Cas9 to function in eukaryotic cells.” By the end of 2012 the result was an unqualified yes, and all three groups published scientific articles about CRISPR/Cas9 in eukaryotes in January 2013. At that point, instead of competing with each other, the three researchers decided to collaborate and found a startup

In this image, the target DNA is purple and blue, and the RNA/Cas9 endonuclease complex is green with a faint brown outline. The RNA/endonuclease is attracted to a three-base-pair DNA sequence called protospacer adjacent motif (yellow). The target DNA sequence is recognized when the RNA matches the DNA along a 20-base-pair region (red). If there is a match, the endonuclease cuts both strands of the DNA. College of Chemistry, UC Berkeley

company. Doudna, Zhang and Church, along with Keith Joung of Harvard Medical School, and College of Chemistry alum (Ph.D. ’99) and Harvard chemistry professor David Liu, founded Editas Medicine to develop therapeutics based on CRISPR/Cas9. Says Doudna, “Actually, Editas is the second startup based on CRISPR from my researcher group. My grad student Rachel Haurwitz has founded Caribou Biosciences with the help of UC’s California Institute for Quantitative Biosciences (QB3), headquartered in Stanley Hall.” Doudna and Haurwitz tapped the expertise of QB3’s Startup in a Box program. “Without Startup in a Box, we may never have formed the company,” says Haurwitz, the CEO of Caribou Biosciences. SAGE Labs, Inc., a leading provider of genome engineering technologies, recently licensed Caribou’s suite of CRISPR research tools. In humans, the easiest targets for CRISPR-enhanced genetic research are diseases with devastating medical consequences stemming from relatively simple genetic defects. Sickle-cell anemia, Huntington’s disease and cystic fibrosis fall into this category. Other illnesses with more complex genetic involvement include autism and schizophrenia. Finding cures for these diseases will be far more complex, but CRISPR techniques will allow more decisive and costeffective research. CRISPR/Cas9 has tremendous potential, but Doudna is careful not to overpromise. “It takes 10-15 years to get a promising drug candidate all the way through FDA clinical trials and ready for the market. However, many other therapeutic applications—research tools, testing kits and even medical devices—don’t take that long, so we may be seeing products resulting from CRISPR in just a few years.” The Foundation for the National Institutes of Health recently awarded Doudna the Lurie Prize in the Biomedical Sciences. The award includes a medal and a $100,000 honorarium. “It is an honor to receive the Lurie Prize,” Doudna said, “particularly because it represents the work of a great many colleagues, collaborators and students, who are all dedicated to rigorous science and continual research progress.” To encourage CRISPR/Cas9 research here in the Bay Area, the Li Ka Shing Foundation has provided a $10 million gift to establish the Li Ka Shing Center for Genomic Engineering at Berkeley and to support joint research with UCSF. The two universities will also provide $2 million in startup funds. Doudna holds the new Li Ka Shing Chancellor’s Chair in Biomedical and Health Sciences. The story of CRISPR/Cas9 is both a dramatic story of scientific discovery and a cautionary tale about overemphasizing the distinction between basic and applied research. It was two applied researchers from a Danish food products company, seeking better cheese and yogurt cultures, who made the important basic science breakthrough that CRISPR was part of an innate immune system in bacteria. And it was Doudna, a basic researcher, who discovered a fantastic new applied gene-editing technology based on CRISPR/Cas9. The point is appreciated by Michael Marletta, president of the Scripps Institute in La Jolla, CA, and a former chair of the Berkeley Department of Chemistry. Says Marletta, “This is a beautiful story of fundamental science and how it enabled a transformative technology in gene editing. The application of the technique is likely to be as important for genetic research as PCR, one of the most important tools in the field.” 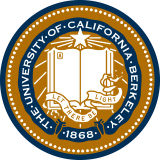