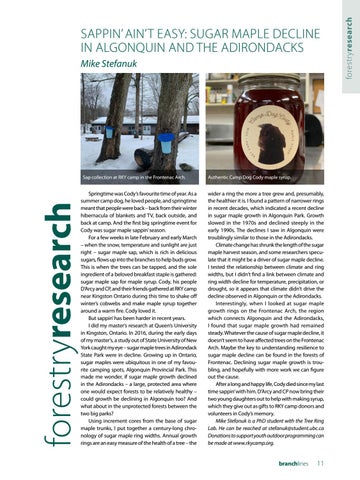 Sap collection at RKY camp in the Frontenac Arch.

Springtime was Cody’s favourite time of year. As a summer camp dog, he loved people, and springtime meant that people were back – back from their winter hibernacula of blankets and TV, back outside, and back at camp. And the first big springtime event for Cody was sugar maple sappin’ season. For a few weeks in late February and early March – when the snow, temperature and sunlight are just right – sugar maple sap, which is rich in delicious sugars, flows up into the branches to help buds grow. This is when the trees can be tapped, and the sole ingredient of a beloved breakfast staple is gathered: sugar maple sap for maple syrup. Cody, his people D’Arcy and CP, and their friends gathered at RKY camp near Kingston Ontario during this time to shake off winter’s cobwebs and make maple syrup together around a warm fire. Cody loved it. But sappin’ has been harder in recent years. I did my master’s research at Queen’s University in Kingston, Ontario. In 2016, during the early days of my master’s, a study out of State University of New York caught my eye – sugar maple trees in Adirondack State Park were in decline. Growing up in Ontario, sugar maples were ubiquitous in one of my favourite camping spots, Algonquin Provincial Park. This made me wonder, if sugar maple growth declined in the Adirondacks – a large, protected area where one would expect forests to be relatively healthy – could growth be declining in Algonquin too? And what about in the unprotected forests between the two big parks? Using increment cores from the base of sugar maple trunks, I put together a century-long chronology of sugar maple ring widths. Annual growth rings are an easy measure of the health of a tree – the

wider a ring the more a tree grew and, presumably, the healthier it is. I found a pattern of narrower rings in recent decades, which indicated a recent decline in sugar maple growth in Algonquin Park. Growth slowed in the 1970s and declined steeply in the early 1990s. The declines I saw in Algonquin were troublingly similar to those in the Adirondacks. Climate change has shrunk the length of the sugar maple harvest season, and some researchers speculate that it might be a driver of sugar maple decline. I tested the relationship between climate and ring widths, but I didn’t find a link between climate and ring width decline for temperature, precipitation, or drought, so it appears that climate didn’t drive the decline observed in Algonquin or the Adirondacks. Interestingly, when I looked at sugar maple growth rings on the Frontenac Arch, the region which connects Algonquin and the Adirondacks, I found that sugar maple growth had remained steady. Whatever the cause of sugar maple decline, it doesn’t seem to have affected trees on the Frontenac Arch. Maybe the key to understanding resilience to sugar maple decline can be found in the forests of Frontenac. Declining sugar maple growth is troubling, and hopefully with more work we can figure out the cause. After a long and happy life, Cody died since my last time sappin’ with him. D’Arcy and CP now bring their two young daughters out to help with making syrup, which they give out as gifts to RKY camp donors and volunteers in Cody’s memory. Mike Stefanuk is a PhD student with the Tree Ring Lab. He can be reached at stefanuk@student.ubc.ca Donations to support youth outdoor programming can be made at www.rkycamp.org.

Branchlines is a newsletter published by the University of British Columbia's Faculty of Forestry. 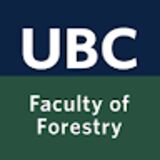