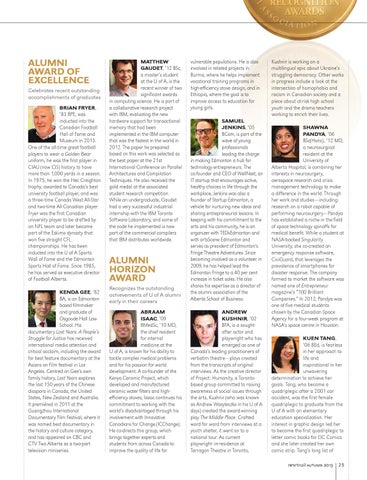 ALUMNI AWARD OF EXCELLENCE Celebrates recent outstanding accomplishments of graduates BRIAN FRYER, ’83 BPE, was inducted into the Canadian Football Hall of Fame and Museum in 2013. One of the all-time great football players to wear a Golden Bear uniform, he was the first player in CIAU (now CIS) history to have more than 1,000 yards in a season. In 1975, he won the Hec Creighton trophy, awarded to Canada’s best university football player, and was a three-time Canada West All-Star and two-time All-Canadian player. Fryer was the first Canadian university player to be drafted by an NFL team and later became part of the Eskimo dynasty that won five straight CFL championships. He has been inducted into the U of A Sports Wall of Fame and the Edmonton Sports Hall of Fame. Since 1985, he has served as executive director of Football Alberta. KENDA GEE, ’82 BA, is an Edmontonbased filmmaker and graduate of Osgoode Hall Law School. His documentary Lost Years: A People’s Struggle for Justice has received international media attention and critical acclaim, including the award for best feature documentary at the Asians on Film festival in Los Angeles. Centred on Gee’s own family history, Lost Years explores the last 150 years of the Chinese diaspora in Canada, the United States, New Zealand and Australia. It premiéred in 2011 at the Guangzhou International Documentary Film Festival, where it was named best documentary in the history and culture category, and has appeared on CBC and CTV Two Alberta as a two-part television miniseries.

MATTHEW GAUDET, ’12 BSc, a master’s student at the U of A, is the recent winner of two significant awards in computing science. He is part of a collaborative research project with IBM, evaluating the new hardware support for transactional memory that had been implemented in the IBM computer that was the fastest in the world in 2012. The paper he prepared based on this work was selected as the best paper at the 21st International Conference on Parallel Architectures and Compilation Techniques. He also received the gold medal at the associated student research competition. While an undergraduate, Gaudet had a very successful industrial internship with the IBM Toronto Software Laboratory, and some of the code he implemented is now part of the commercial compilers that IBM distributes worldwide.

ALUMNI HORIZON AWARD Recognizes the outstanding achievements of U of A alumni early in their careers ABRAAM ISAAC, ’09 BMedSc, ’10 MD, the chief resident for internal medicine at the U of A, is known for his ability to tackle complex medical problems and for his passion for world development. A co-founder of the Kenya Ceramic Project, which developed and manufactured ceramic water filters and highefficiency stoves, Isaac continues his commitment to working with the world’s disadvantaged through his involvement with Innovative Canadians for Change (ICChange). He co-directs this group, which brings together experts and students from across Canada to improve the quality of life for

vulnerable populations. He is also involved in related projects in Burma, where he helps implement vocational training programs in high-efficiency stove design, and in Ethiopia, where the goal is to improve access to education for young girls. SAMUEL JENKINS, ’05 BCom, is part of the wave of young professionals leading the charge in making Edmonton a hub for technology entrepreneurs. The co-founder and CEO of WellNext, an IT startup that encourages active, healthy choices in life through the workplace, Jenkins was also a founder of Startup Edmonton, a vehicle for nurturing new ideas and sharing entrepreneurial lessons. In keeping with his commitment to the arts and his community, he is an organizer with TEDxEdmonton and with artsScene Edmonton and serves as president of Edmonton’s Fringe Theatre Adventures. Since becoming involved as a volunteer in 2009, he has helped lead the Edmonton Fringe to a 40 per cent increase in ticket sales. He also shares his expertise as a director of the alumni association of the Alberta School of Business. ANDREW KUSHNIR, ’02 BFA, is a soughtafter actor and playwright who has emerged as one of Canada’s leading practitioners of verbatim theatre — plays created from the transcripts of original interviews. As the creative director of Project: Humanity, a Torontobased group committed to raising awareness of social issues through the arts, Kushnir (who was known as Andrew Wasyleczko in his U of A days) created the award-winning play The Middle Place. Crafted word for word from interviews at a youth shelter, it went on to a national tour. As current playwright–in-residence at Tarragon Theatre in Toronto,

Kushnir is working on a multilingual epic about Ukraine’s struggling democracy. Other works in progress include a look at the intersection of homophobia and racism in Canadian society and a piece about at-risk high school youth and the drama teachers working to enrich their lives. SHAWNA PANDYA, ’06 BSc(Hons), ’12 MD, a neurosurgical resident at the University of Alberta Hospital, is combining her interests in neurosurgery, aerospace research and crisis management technology to make a difference in the world. Through her work and studies — including research on a robot capable of performing neurosurgery — Pandya has established a niche in the field of space technology spinoffs for medical benefit. While a student at NASA-backed Singularity University, she co-created an emergency response software, CiviGuard, that leverages the prevalence of smartphones for disaster response. The company formed to market the software was named one of Entrepreneur magazine’s “100 Brilliant Companies.” In 2012, Pandya was one of five medical students chosen by the Canadian Space Agency for a four-week program at NASA’s space centre in Houston. KUEN TANG, ’06 BEd, is fearless in her approach to life and inspirational in her unwavering determination to achieve her goals. Tang, who became a quadriplegic after a 2001 car accident, was the first female quadriplegic to graduate from the U of A with an elementary education specialization. Her interest in graphic design led her to become the first quadriplegic to letter comic books for DC Comics and she later created her own comic strip. Tang’s long list of new trail autumn 2013    25 New Trail is the official magazine of the University of Alberta Alumni Association.

New Trail is the official magazine of the University of Alberta Alumni Association.