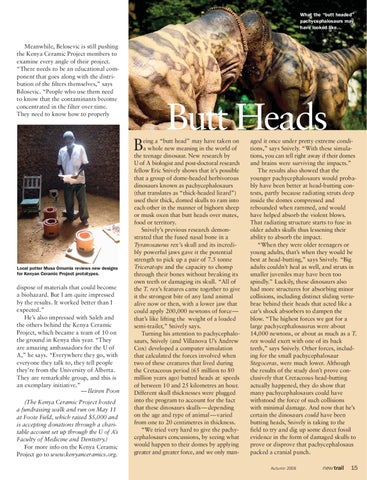 What the “butt headed” pachycephalosaurs may have looked like.

Meanwhile, Belosevic is still pushing the Kenya Ceramic Project members to examine every angle of their project. “There needs to be an educational component that goes along with the distribution of the filters themselves,” says Bilosevic. “People who use them need to know that the contaminants become concentrated in the filter over time. They need to know how to properly

dispose of materials that could become a biohazard. But I am quite impressed by the results. It worked better than I expected.” He’s also impressed with Saleh and the others behind the Kenya Ceramic Project, which became a team of 10 on the ground in Kenya this year. “They are amazing ambassadors for the U of A,” he says. “Everywhere they go, with everyone they talk to, they tell people they’re from the University of Alberta. They are remarkable group, and this is an exemplary initiative.” —Ileiren Poon (The Kenya Ceramic Project hosted a fundraising walk and run on May 11 at Foote Field, which raised $5,000 and is accepting donations through a charitable account set up through the U of A’s Faculty of Medicine and Dentistry.) For more info on the Kenya Ceramic Project go to www.kenyanceramics.org.

eing a “butt head” may have taken on a whole new meaning in the world of the teenage dinosaur. New research by U of A biologist and post-doctoral research fellow Eric Snively shows that it’s possible that a group of dome-headed herbivorous dinosaurs known as pachycephalosaurs (that translates as “thick-headed lizard”) used their thick, domed skulls to ram into each other in the manner of bighorn sheep or musk oxen that butt heads over mates, food or territory. Snively’s previous research demonstrated that the fused nasal bone in a Tyranosaurus rex’s skull and its incredibly powerful jaws gave it the potential strength to pick up a pair of 7.5 tonne Triceratops and the capacity to chomp through their bones without breaking its own teeth or damaging its skull. “All of the T. rex’s features came together to give it the strongest bite of any land animal alive now or then, with a lower jaw that could apply 200,000 newtons of force — that’s like lifting the weight of a loaded semi-trailer,” Snively says. Turning his attention to pachycephalosaurs, Snively (and Villanova U’s Andrew Cox) developed a computer simulation that calculated the forces involved when two of these creatures that lived during the Cretaceous period (65 million to 80 million years ago) butted heads at speeds of between 10 and 25 kilometres an hour. Different skull thicknesses were plugged into the program to account for the fact that these dinosaurs skulls — depending on the age and type of animal — varied from one to 20 centimetres in thickness. “We tried very hard to give the pachycephalosaurs concussions, by seeing what would happen to their domes by applying greater and greater force, and we only man-

aged it once under pretty extreme conditions,” says Snively. “With these simulations, you can tell right away if their domes and brains were surviving the impacts.” The results also showed that the younger pachycephalosaurs would probably have been better at head-butting contests, partly because radiating struts deep inside the domes compressed and rebounded when rammed, and would have helped absorb the violent blows. That radiating structure starts to fuse in older adults skulls thus lessening their ability to absorb the impact. “When they were older teenagers or young adults, that’s when they would be best at head-butting,” says Snively. “Big adults couldn’t heal as well, and struts in smaller juveniles may have been too spindly.” Luckily, these dinosaurs also had more structures for absorbing minor collisions, including distinct sliding vertebrae behind their heads that acted like a car’s shock absorbers to dampen the blow. “The highest forces we got for a large pachycephalosaurus were about 14,000 newtons, or about as much as a T. rex would exert with one of its back teeth,” says Snively. Other forces, including for the small pachycephalosaur Stegoceras, were much lower. Although the results of the study don’t prove conclusively that Cretaceous head-butting actually happened, they do show that many pachycephalosaurs could have withstood the force of such collisions with minimal damage. And now that he’s certain the dinosaurs could have been butting heads, Snively is taking to the field to try and dig up some direct fossil evidence in the form of damaged skulls to prove or disprove that pachycephalosaus packed a cranial punch. Autumn 2008