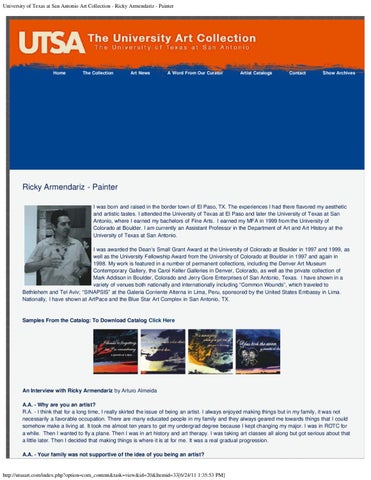 A Word From Our Curator

An Interview with Ricky Armendariz by Arturo Almeida A.A. - Why are you an artist? R.A. - I think that for a long time, I really skirted the issue of being an artist. I always enjoyed making things but in my family, it was not necessarily a favorable occupation. There are many educated people in my family and they always geared me towards things that I could somehow make a living at. It took me almost ten years to get my undergrad degree because I kept changing my major. I was in ROTC for a while. Then I wanted to fly a plane. Then I was in art history and art therapy. I was taking art classes all along but got serious about that a little later. Then I decided that making things is where it is at for me. It was a real gradual progression. A.A. - Your family was not supportive of the idea of you being an artist?

University of Texas at San Antonio Art Collection - Ricky Armendariz - Painter consumers, landscape as a subject matter is often seen as inferior in “high art” arenas. But whether or not these images or truisms fit neatly with the viewers aesthetic tastes, they continue to exist in the present and enjoy a long-standing tradition as subject matter in art. Further inspiration for this body of work comes from my emotional response to paintings by Joseph William Turner, the profound song lyrics of 80’s pop and country music, and the awe inspiring sunsets of Texas, New Mexico and Colorado. Materials have always been important in my work. The materials I use give my work a place of origin and cultural associations. My favorite medium is plywood. Initially, I was drawn to the material for the many contradictions that plywood embodies. It is natural and unnatural, man-made and organic in substance. The carving of the plywood was influenced by memories of my father’s wood shop where he made cursive script signs reading “Hacienda de Armendariz.” But above all else, it is hard not to notice the pervasiveness of the carved-wood look as it is culturally associated with the Southwest immortalized by Hollywood. These materials and images compliment the Southwestern mystique and reafirm Americans attraction to Western art which is firmly rooted in the border culture of the Southwest. The aesthetic combination of Western imagery coupled with contemporary and art historical influences are a foundation for my work. My goal with this body of work is to elevate the perception of landscape-genre painting, and contribute to its long history in art through aligning my work with an established and mainstream American aesthetic. 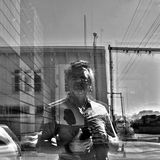