Nothing in the World But Youth catalogue excerpts 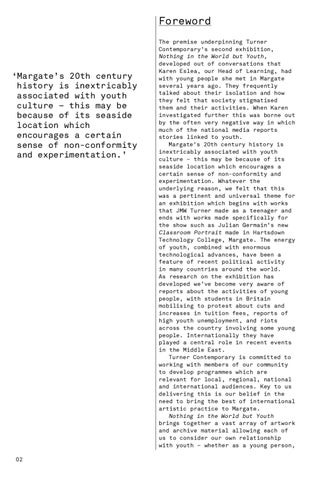 ‘Margate’s 20th century history is inextricably associated with youth culture – this may be because of its seaside location which encourages a certain sense of non-conformity and experimentation.’

The premise underpinning Turner Contemporary’s second exhibition, Nothing in the World but Youth, developed out of conversations that Karen Eslea, our Head of Learning, had with young people she met in Margate several years ago. They frequently talked about their isolation and how they felt that society stigmatised them and their activities. When Karen investigated further this was borne out by the often very negative way in which much of the national media reports stories linked to youth. Margate’s 20th century history is inextricably associated with youth culture – this may be because of its seaside location which encourages a certain sense of non-conformity and experimentation. Whatever the underlying reason, we felt that this was a pertinent and universal theme for an exhibition which begins with works that JMW Turner made as a teenager and ends with works made specifically for the show such as Julian Germain’s new Classroom Portrait made in Hartsdown Technology College, Margate. The energy of youth, combined with enormous technological advances, have been a feature of recent political activity in many countries around the world. As research on the exhibition has developed we’ve become very aware of reports about the activities of young people, with students in Britain mobilising to protest about cuts and increases in tuition fees, reports of high youth unemployment, and riots across the country involving some young people. Internationally they have played a central role in recent events in the Middle East. Turner Contemporary is committed to working with members of our community to develop programmes which are relevant for local, regional, national and international audiences. Key to us delivering this is our belief in the need to bring the best of international artistic practice to Margate. Nothing in the World but Youth brings together a vast array of artwork and archive material allowing each of us to consider our own relationship with youth – whether as a young person,

Nothing in the World But Youth catalogue excerpts

Full of fascinating essays that explore youth cutlure from the late nineteenth century to today, the exhibition catalogue is the ideal companion for those seeking to delve into this fascinating subject further, as a keepsake, or for study. 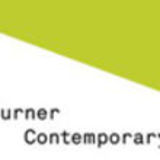