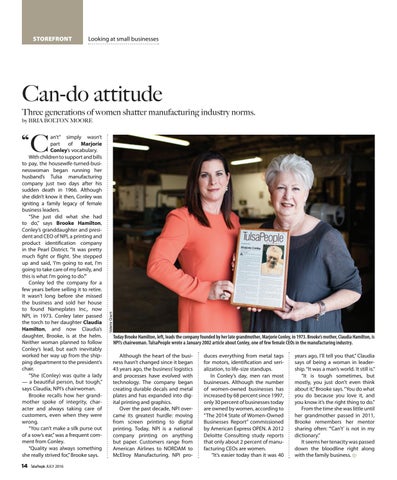 an’t” simply wasn’t part of Marjorie Conley’s vocabulary. With children to support and bills to pay, the housewife-turned-businesswoman began running her husband’s Tulsa manufacturing company just two days after his sudden death in 1966. Although she didn’t know it then, Conley was igniting a family legacy of female business leaders. “She just did what she had to do,” says Brooke Hamilton, Conley’s granddaughter and president and CEO of NPI, a printing and product identiﬁcation company in the Pearl District. “It was pretty much ﬁght or ﬂight. She stepped up and said, ‘I’m going to eat, I’m going to take care of my family, and this is what I’m going to do.’” Conley led the company for a few years before selling it to retire. It wasn’t long before she missed the business and sold her house to found Nameplates Inc., now NPI, in 1973. Conley later passed the torch to her daughter Claudia Hamilton, and now Claudia’s daughter, Brooke, is at the helm. Neither woman planned to follow Conley’s lead, but each inevitably worked her way up from the shipping department to the president’s chair. “She (Conley) was quite a lady — a beautiful person, but tough,” says Claudia, NPI’s chairwoman. Brooke recalls how her grandmother spoke of integrity, character and always taking care of customers, even when they were wrong. “You can’t make a silk purse out of a sow’s ear,” was a frequent comment from Conley. “Quality was always something she really strived for,” Brooke says.

Today Brooke Hamilton, left, leads the company founded by her late grandmother, Marjorie Conley, in 1973. Brooke’s mother, Claudia Hamilton, is NPI’s chairwoman. TulsaPeople wrote a January 2002 article about Conley, one of few female CEOs in the manufacturing industry. Although the heart of the business hasn’t changed since it began 43 years ago, the business’ logistics and processes have evolved with technology. The company began creating durable decals and metal plates and has expanded into digital printing and graphics. Over the past decade, NPI overcame its greatest hurdle: moving from screen printing to digital printing. Today, NPI is a national company printing on anything but paper. Customers range from American Airlines to NORDAM to McElroy Manufacturing. NPI pro-

duces everything from metal tags for motors, identiﬁcation and serialization, to life-size standups. In Conley’s day, men ran most businesses. Although the number of women-owned businesses has increased by 68 percent since 1997, only 30 percent of businesses today are owned by women, according to “The 2014 State of Women-Owned Businesses Report” commissioned by American Express OPEN. A 2012 Deloitte Consulting study reports that only about 2 percent of manufacturing CEOs are women. “It’s easier today than it was 40

years ago, I’ll tell you that,” Claudia says of being a woman in leadership. “It was a man’s world. It still is.” “It is tough sometimes, but mostly, you just don’t even think about it,” Brooke says. “You do what you do because you love it, and you know it’s the right thing to do.” From the time she was little until her grandmother passed in 2011, Brooke remembers her mentor sharing often: “‘Can’t’ is not in my dictionary.” It seems her tenacity was passed down the bloodline right along with the family business. tþ 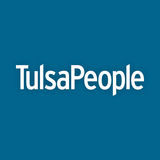