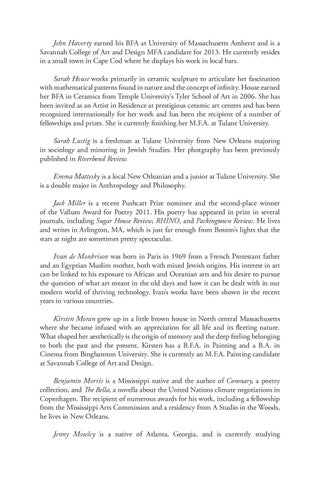 John Haverty earned his BFA at University of Massachusetts Amherst and is a Savannah College of Art and Design MFA candidate for 2013. He currently resides in a small town in Cape Cod where he displays his work in local bars. Sarah House works primarily in ceramic sculpture to articulate her fascination with mathematical patterns found in nature and the concept of infinity. House earned her BFA in Ceramics from Temple University’s Tyler School of Art in 2006. She has been invited as an Artist in Residence at prestigious ceramic art centers and has been recognized internationally for her work and has been the recipient of a number of fellowships and prizes. She is currently finishing her M.F.A. at Tulane University. Sarah Lustig is a freshman at Tulane University from New Orleans majoring in sociology and minoring in Jewish Studies. Her photgraphy has been previously published in Riverbend Review. Emma Mattesky is a local New Orleanian and a junior at Tulane University. She is a double major in Anthropology and Philosophy. Jack Miller is a recent Pushcart Prize nominee and the second-place winner of the Vallum Award for Poetry 2011. His poetry has appeared in print in several journals, including Sugar House Review, RHINO, and Packingtown Review. He lives and writes in Arlington, MA, which is just far enough from Boston’s lights that the stars at night are sometimes pretty spectacular. Ivan de Monbrison was born in Paris in 1969 from a French Protestant father and an Egyptian Muslim mother, both with mixed Jewish origins. His interest in art can be linked to his exposure to African and Oceanian arts and his desire to pursue the question of what art meant in the old days and how it can be dealt with in our modern world of thriving technology. Ivan’s works have been shown in the recent years in various countries. Kirsten Moran grew up in a little brown house in North central Massachusetts where she became infused with an appreciation for all life and its fleeting nature. What shaped her aesthetically is the origin of memory and the deep feeling belonging to both the past and the present. Kirsten has a B.F.A. in Painting and a B.A. in Cinema from Binghamton University. She is currently an M.F.A. Painting candidate at Savannah College of Art and Design. Benjamin Morris is a Mississippi native and the author of Coronary, a poetry collection, and The Bella, a novella about the United Nations climate negotiations in Copenhagen. The recipient of numerous awards for his work, including a fellowship from the Mississippi Arts Commission and a residency from A Studio in the Woods, he lives in New Orleans. Jenny Moseley is a native of Atlanta, Georgia, and is currently studying

Tulane Review Spring 2012 is an international collection of poetry, prose, and art. It is an undergraduate-produced literary journal. Our biggest issue yet, this collection also features interviews with local writers. 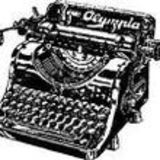