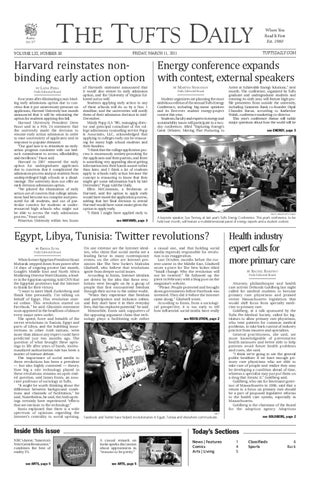 Four years after eliminating a non-binding early admissions option due to concerns that it put unnecessary pressure on applicants, Harvard University last month announced that it will be reinstating the option for students applying this fall. Harvard University President Drew Faust said in a Feb. 24 statement that the university made the decision to resume early action admission in order to ease uncertainty of applicants and in response to popular demand. “Our goal now is to reinstitute an earlyaction program consistent with our bedrock commitment to access, affordability, and excellence,” Faust said. Harvard in 2007 removed the early option for undergraduate applicants due to concerns that it complicated the admissions process and put students from underprivileged high schools at a disadvantage. The university does not offer an early decision admissions option. “We piloted the elimination of early action out of concern that college admissions had become too complex and pressured for all students, and out of particular concern for students at underresourced high schools who might not be able to access the early admissions process,” Faust said. Princeton University within two hours

of Harvard’s statement announced that it would also restore its early admission option, and the University of Virginia followed suit as well. Students applying early action to any of these schools will do so by a Nov. 1 deadline, and the universities will notify them of their admission decision in midDecember. Mindy Popp (LA ’98), managing director and principal consultant of the college admissions counseling service Popp & Associates, LLC, acknowledged that applying to colleges early can be reassuring for many high school students and their families. “I think that the college application process is enormously anxiety-provoking for the applicants and their parents, and there is something very appealing about getting information into their hands sooner rather than later, and I think a lot of students apply to schools early action because the concept is reassuring to know that they might get some information back by late December,” Popp told the Daily. Ellen McCammon, a freshman at Harvard, said the option to apply early would have eased the application process, adding that her final decision to attend Harvard would have come easier given the option to apply early. “I think I might have applied early to see HARVARD, page 3

Student organizers are planning the most ambitious edition of the annual Tufts Energy Conference, including big-name speakers and its first-ever student energy-project contest this year. Students, faculty and experts in energy and sustainability issues will participate in a twoday conference, titled “Exploring Energy’s Great Debates: Moving Past Posturing to

When former Egyptian President Hosni Mubarak stepped down from power after 14 days of ongoing protest last month, Google’s Middle East and North Africa Marketing Director Wael Ghonim, a leader in the Egyptian uprising, told CNN that the Egyptian protestors had the Internet to thank for their victory. “I want to meet Mark Zuckerberg and thank him personally. I’m talking on behalf of Egypt. This revolution started online. This revolution started on Facebook,” he said. Ghonim’s statement soon appeared in the headlines of almost every major news outlet. The speed, force and breadth of the recent revolutions in Tunisia, Egypt and parts of Libya, and the bubbling insurrections in other Arab nations, were more than almost any expert could have predicted just two months ago. The question of what brought these uprisings to life after years of harsh, institutionalized authoritarian rule has been a matter of intense debate. The importance of social media to these revolutions has been a prevalent — but also highly contested — theory. How big a role technology played in these revolutions remains an open-ended question, said James Ennis, an associate professor of sociology at Tufts. “It might be worth thinking about the difference between background conditions and channels of facilitation,” he said. Nonetheless, he said, the Arab uprisings certainly have experienced “effects that are intrinsic to the technology.” Ennis explained that there is a wide spectrum of opinions regarding the Internet’s centrality to social uprising.

On one extreme are the Internet idealists, who claim that social media are a leading factor in many contemporary events; on the other are Internet pessimists like The New Yorker’s Malcolm Gladwell, who believe that revolutions ignite from deeper social issues. According to Ennis, Internet idealists are driven by the idea that these revolutions were brought on by a group of people that first encountered freedom through their access to the online world. “When they experience that freedom and participation and inclusion online, and they don’t have it in their everyday lives, that has explosive potential,” he said. Meanwhile, Ennis said, supporters of the opposing argument claim that technology plays a facilitating role rather

Arrive at Achievable Energy Solutions,” next month. The conference, organized by Tufts graduate and undergraduate students and entering its sixth year, will feature high-profile presenters from outside the university, including Grameen Bank co-founder Dipal Chandra Barua, according to Katherine Walsh, conference marketing co-director. This year’s conference theme will tackle major questions about how the world will be see ENERGY, page 3

A keynote speaker, Sue Tierney, at last year’s Tufts Energy Conference. This year’s conference, to be held next month, will feature a multidimensional panel of energy experts and a student contest.

a causal one, and that holding social media expressly responsible for revolution is an exaggeration. Last October, months before the current unrest in the Middle East, Gladwell wrote a piece for The New Yorker titled “Small change: Why the revolution will not be tweeted.” He followed up the piece in February with a blog post on the magazine’s website. “Please. People protested and brought down governments before Facebook was invented. They did it before the Internet came along,” Gladwell wrote. According to Ennis, from a sociological perspective, it is too early to tell how influential social media have really see REVOLUTION, page 2

Attorney, philanthropist and health care activist Deborah Goldberg last night called for medical students to become primary care physicians and praised recent Massachusetts legislation that would shift focus from specialty medicine to primary care. Goldberg, at a talk sponsored by the Tufts Pre-Medical Society, called for legislators to allow primary care physicians, who treat patients for common medical problems, to take back control of industry practice from insurers and specialists. General practitioners, she said, are more knowledgeable of preventative health measures and better able to help patients avoid future health problems and costs, she said. “I think we’re going to see the general public healthier if we have enough primary care physicians who are able to take care of people and realize they may be developing a condition ahead of time, whereas a specialist may just put them on a drug that [treats] it,” Goldberg said. Goldberg, who ran for lieutenant governor of Massachusetts in 2006, said that a return to a focus on primary care should be a part of proposed legislative reforms to the health care system, especially in Massachusetts. Goldberg is the chairman of the Board for the adoption agency Adoptions

A casual remark on looks sparks discussion about appearances in “reasons to be pretty.” 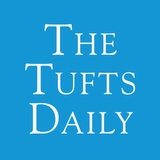