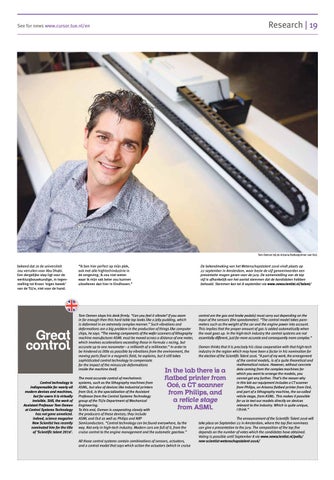 Great control Control technology is indispensable for nearly all modern devices and machines, but for users it is virtually invisible. Still, the work of Assistant Professor Tom Oomen at Control Systems Technology has not gone unnoticed. Indeed, science magazine New Scientist has recently nominated him for the title of ‘Scientific talent 2016’.

Tom Oomen slaps his desk firmly. “Can you feel it vibrate? If you zoom in far enough then this hard table top looks like a jelly pudding, which is deformed in an extremely complex manner.” Such vibrations and deformations are a big problem in the production of things like computer chips, he says. “The moving components of the wafer scanners of lithography machine manufacturer ASML must be moved across a distance of one meter, which involves accelerations exceeding those in Formula 1 racing, but accurate up to one nanometer - a millionth of a millimeter.” In order to be hindered as little as possible by vibrations from the environment, the moving parts float in a magnetic field, he explains, but it still takes sophisticated control technology to compensate for the impact of the minuscule deformations inside the machine itself.

control are the gas and brake pedals) must carry out depending on the input of the sensors (the speedometer). “The control model takes para­ meters such as the weight of the car and the engine power into account. This implies that the proper amount of gas is added automatically when the road goes up. In the high-tech industry the control systems are not essentially different, just far more accurate and consequently more complex.” Oomen thinks that it is precisely his close cooperation with that high-tech industry in the region which may have been a factor in his nomination for the election of the Scientific Talent 2016. “A part of my work, the arrangement of the control models, is of a quite theoretical and mathematical nature. However, without concrete data coming from the complex machines for which you want to arrange the models, you cannot get any further. That’s the reason why in this lab our equipment includes a CT scanner from Philips, an Arizona flatbed printer from Océ, and part of a lithography machine, the so-called reticle stage, from ASML. This makes it possible for us to test our models directly on devices relevant to the industry. Which is quite unique, I think.”

In the lab there is a flatbed printer from Océ, a CT scanner from Philips, and a reticle stage from ASML

The most accurate control of mechatronic systems, such as the lithography machines from ASML, but also of devices like industrial printers from Océ, is the specialization of the Assistant Professor from the Control Systems Technology group of the TU/e Department of Mechanical Engineering. To this end, Oomen is cooperating closely with the producers of these devices; they include ASML and Océ as well as Philips and NXP Semi­conductors. “Control technology can be found everywhere, by the way. Not only in high-tech industry. Modern cars are full of it, from the cruise control to the engine management and the automatic gearbox.”

All those control systems contain combinations of sensors, actuators, and a control model that says which action the actuators (which in cruise

The announcement of the Scientific Talent 2016 will take place on September 22 in Amsterdam, where the top five nominees can give a presentation to the jury. The composition of the top five depends on the number of votes which the candidates have obtained. Voting is possible until September 8 via www.newscientist.nl/polls/ new-scientist-wetenschapstalent-2016/ 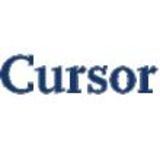