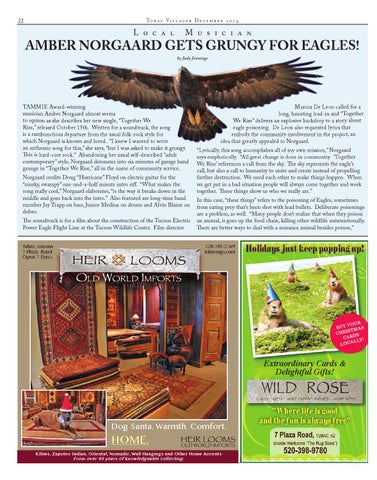 amber Norgaard gets gruNgy for eagles! by Judy Jennings

TAMMIE Award-winning musician Amber Norgaard almost seems to squirm as she describes her new single, “Together We Rise,” released October 15th. Written for a soundtrack, the song is a rambunctious departure from the usual folk-rock style for which Norgaard is known and loved. “I knew I wanted to write an anthemic song for this,” she says, “but I was asked to make it grungy. This is hard-core rock.” Abandoning her usual self-described “adult contemporary” style, Norgaard detonates into six minutes of garage band grunge in “Together We Rise,” all in the name of community service.

Norgaard credits Doug “Hurricane” Floyd on electric guitar for the “murky, swampy” one-and-a-half minute intro riff. “What makes the song really cool,” Norgaard elaborates, “is the way it breaks down in the middle and goes back into the intro.” Also featured are long-time band member Jay Trapp on bass, Junior Medina on drums and Alvin Blaine on dobro.

The soundtrack is for a film about the construction of the Tucson Electric Power Eagle Flight Line at the Tucson Wildlife Center. Film director

Marcus De Leon called for a long, haunting lead-in and “Together We Rise” delivers an explosive backdrop to a story about eagle poisoning. De Leon also requested lyrics that embody the community involvement in the project, an idea that greatly appealed to Norgaard.

“Lyrically, this song accomplishes all of my own mission,” Norgaard says emphatically. “All great change is done in community. ‘Together We Rise’ references a call from the sky. The sky represents the eagle’s call, but also a call to humanity to unite and create instead of propelling further destruction. We need each other to make things happen. When we get put in a bad situation people will always come together and work together. These things show us who we really are.”

In this case, “these things” refers to the poisoning of Eagles, sometimes from eating prey that’s been shot with lead bullets. Deliberate poisonings are a problem, as well. “Many people don’t realize that when they poison an animal, it goes up the food chain, killing other wildlife unintentionally. There are better ways to deal with a nuisance animal besides poison,” 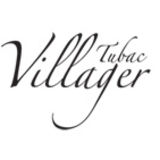 The December 2014 issue of the Tubac Villager printed 8,000 copies. Distributed throughout the Santa Cruz Valley in Southern Arizona.

The December 2014 issue of the Tubac Villager printed 8,000 copies. Distributed throughout the Santa Cruz Valley in Southern Arizona.