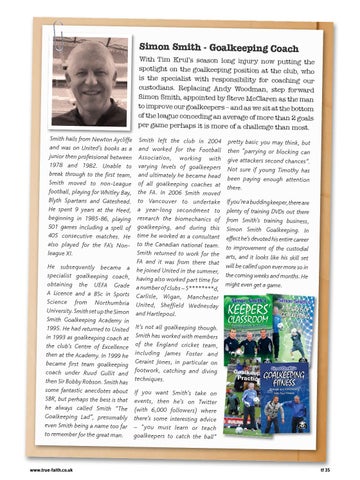 With Tim Krul’s season long injury now putting the spotlight on the goalkeeping position at the club, who is the specialist with responsibility for coaching our custodians. Replacing Andy Woodman, step forward Simon Smith, appointed by Steve McClaren as the man to improve our goalkeepers – and as we sit at the bottom of the league conceding an average of more than 2 goals per game perhaps it is more of a challenge than most. Smith hails from Newton Aycliffe and was on United’s books as a junior then professional between 1978 and 1982. Unable to break through to the first team, Smith moved to non-League football, playing for Whitley Bay, Blyth Spartans and Gateshead. He spent 9 years at the Heed, beginning in 1985-86, playing 501 games including a spell of 405 consecutive matches. He also played for the FA’s Nonleague XI. He subsequently became a specialist goalkeeping coach, obtaining the UEFA Grade A Licence and a BSc in Sports Science from Northumbria University. Smith set up the Simon Smith Goalkeeping Academy in 1995. He had returned to United in 1993 as goalkeeping coach at the club’s Centre of Excellence then at the Academy. In 1999 he became first team goalkeeping coach under Ruud Gullit and then Sir Bobby Robson. Smith has some fantastic anecdotes about SBR, but perhaps the best is that he always called Smith “The Goalkeeping Lad”, presumably even Smith being a name too far to remember for the great man.

Smith left the club in 2004 and worked for the Football Association, working with varying levels of goalkeepers and ultimately he became head of all goalkeeping coaches at the FA. In 2006 Smith moved to Vancouver to under take a year-long secondment to research the biomechanics of goalkeeping, and during this time he worked as a consultant to the Canadian national team. Smith returned to work for the FA and it was from there that he joined United in the summer, having also worked part time for a number of clubs – S********d, Carlisle, Wigan, Manchester United, Sheffield Wednesday and Hartlepool.

pretty basic you may think, but then ”parrying or blocking can give attackers second chances”. Not sure if young Timothy has been paying enough attention there. If you’re a budding keeper, there are plenty of training DVDs out there from Smith’s training business, Simon Smith Goalkeeping. In effect he’s devoted his entire career to improvement of the custodial arts, and it looks like his skill set will be called upon ever more so in the coming weeks and months. He might even get a game.

It’s not all goalkeeping though. Smith has worked with members of the England cricket team, including James Foster and Geraint Jones, in particular on footwork, catching and diving techniques. If you want Smith’s take on events, then he’s on Twitter (with 6,000 follow ers) where there’s some interesting advice – “you must learn or teach goalkeepers to catch the ball”