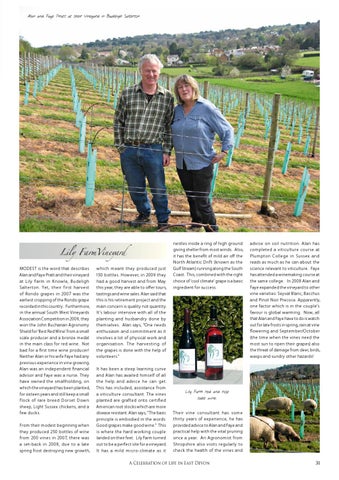 Alan and Faye Pratt at their Vineyard in Budleigh Salterton

Lily FarmVineyard MODEST is the word that describes Alan and Faye Pratt and their vineyard at Lily Farm in Knowle, Budeligh Salterton. Yet, their first harvest of Rondo grapes in 2007 was the earliest cropping of the Rondo grape recorded in this country. Furthermore, in the annual South West Vineyards Association Competition in 2009, they won the John Buchanan Agronomy Shield for ‘Best Red Wine’ from a small scale producer and a bronze medal in the main class for red wine. Not bad for a first time wine producer! Neither Alan or his wife Faye had any previous experience in vine growing. Alan was an independent financial advisor and Faye was a nurse. They have owned the smallholding, on which the vineyard has been planted, for sixteen years and still keep a small flock of rare breed Dorset Down sheep, Light Sussex chickens, and a few ducks. From their modest beginning when they produced 250 bottles of wine from 200 vines in 2007, there was a set-back in 2008, due to a late spring frost destroying new growth,

which meant they produced just 150 bottles. However, in 2009 they had a good harvest and from May this year, they are able to offer tours, tastings and wine sales. Alan said that this is his retirement project and the main concern is quality not quantity. It’s labour intensive with all of the planting and husbandry done by themselves. Alan says, “One needs enthusiasm and commitment as it involves a lot of physical work and organisation. The harvesting of the grapes is done with the help of volunteers.” It has been a steep learning curve and Alan has availed himself of all the help and advice he can get. This has included, assistance from a viticulture consultant. The vines planted are grafted onto certified American root stocks which are more disease resistant. Alan says, "The basic principle is embodied in the words: Good grapes make good wine." This is where the hard working couple landed on their feet. Lily Farm turned out to be a perfect site for a vineyard. It has a mild micro-climate as it

nestles inside a ring of high ground giving shelter from most winds. Also, it has the benefit of mild air off the North Atlantic Drift (known as the Gulf Stream) running along the South Coast. This, combined with the right choice of ‘cool climate’ grape is a basic ingredient for success.

advise on soil nutrition. Alan has completed a viticulture course at Plumpton College in Sussex and reads as much as he can about the science relevant to viticulture. Faye has attended a winemaking course at the same college. In 2008 Alan and Faye expanded the vineyard to other vine varieties: Seyval Blanc, Bacchus and Pinot Noir Precoce. Apparently, one factor which is in the couple’s favour is global warming. Now, all that Alan and Faye have to do is watch out for late frosts in spring, rain at vine flowering and September/October (the time when the vines need the most sun to ripen their grapes) also the threat of damage from deer, birds, wasps and sundry other hazards!

Lily Farm red and rose table wine. Their vine consultant has some thirty years of experience, he has provided advice to Alan and Faye and practical help with the vital pruning once a year. An Agronomist from Shropshire also visits regularly to check the health of the vines and

A Celebration of Life in East Devon Glossy magazine covering all of the east Devon area

Glossy magazine covering all of the east Devon area