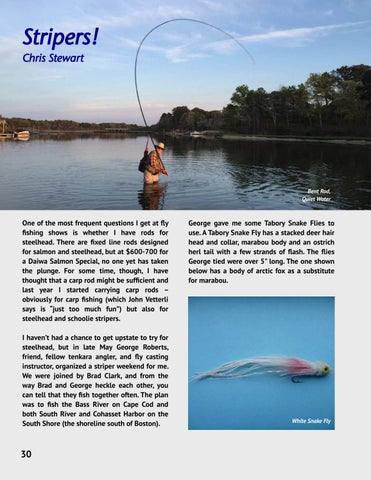 One of the most frequent questions I get at ﬂy ﬁshing shows is whether I have rods for steelhead. There are ﬁxed line rods designed for salmon and steelhead, but at $600-700 for a Daiwa Salmon Special, no one yet has taken the plunge. For some time, though, I have thought that a carp rod might be sufﬁcient and last year I started carrying carp rods – obviously for carp ﬁshing (which John Vetterli says is “just too much fun”) but also for steelhead and schoolie stripers. I haven’t had a chance to get upstate to try for steelhead, but in late May George Roberts, friend, fellow tenkara angler, and ﬂy casting instructor, organized a striper weekend for me. We were joined by Brad Clark, and from the way Brad and George heckle each other, you can tell that they ﬁsh together often. The plan was to ﬁsh the Bass River on Cape Cod and both South River and Cohasset Harbor on the South Shore (the shoreline south of Boston).

George gave me some Tabory Snake Flies to use. A Tabory Snake Fly has a stacked deer hair head and collar, marabou body and an ostrich herl tail with a few strands of ﬂash. The ﬂies George tied were over 5" long. The one shown below has a body of arctic fox as a substitute for marabou.