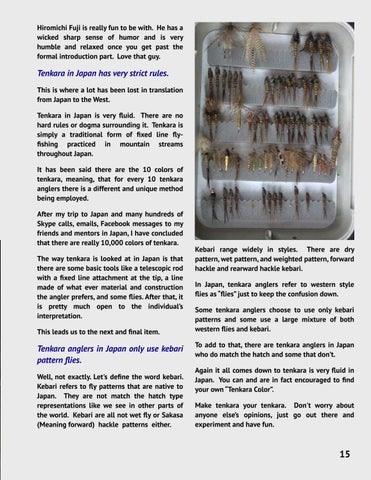 Hiromichi Fuji is really fun to be with. He has a wicked sharp sense of humor and is very humble and relaxed once you get past the formal introduction part. Love that guy.

Tenkara in Japan has very strict rules. This is where a lot has been lost in translation from Japan to the West.

Tenkara in Japan is very ﬂuid. There are no hard rules or dogma surrounding it. Tenkara is simply a traditional form of ﬁxed line ﬂyﬁshing practiced in mountain streams throughout Japan.

It has been said there are the 10 colors of tenkara, meaning, that for every 10 tenkara anglers there is a different and unique method being employed.

After my trip to Japan and many hundreds of Skype calls, emails, Facebook messages to my friends and mentors in Japan, I have concluded that there are really 10,000 colors of tenkara.

The way tenkara is looked at in Japan is that there are some basic tools like a telescopic rod with a ﬁxed line attachment at the tip, a line made of what ever material and construction the angler prefers, and some ﬂies. After that, it is pretty much open to the individual’s interpretation.

This leads us to the next and ﬁnal item.

Tenkara anglers in Japan only use kebari pattern ﬂies. Well, not exactly. Let's deﬁne the word kebari. Kebari refers to ﬂy patterns that are native to Japan. They are not match the hatch type representations like we see in other parts of the world. Kebari are all not wet ﬂy or Sakasa (Meaning forward) hackle patterns either.

In Japan, tenkara anglers refer to western style ﬂies as “ﬂies” just to keep the confusion down.

Some tenkara anglers choose to use only kebari patterns and some use a large mixture of both western ﬂies and kebari.

To add to that, there are tenkara anglers in Japan who do match the hatch and some that don’t.

Again it all comes down to tenkara is very ﬂuid in Japan. You can and are in fact encouraged to ﬁnd your own “Tenkara Color”.

Make tenkara your tenkara. Don't worry about anyone else’s opinions, just go out there and experiment and have fun.