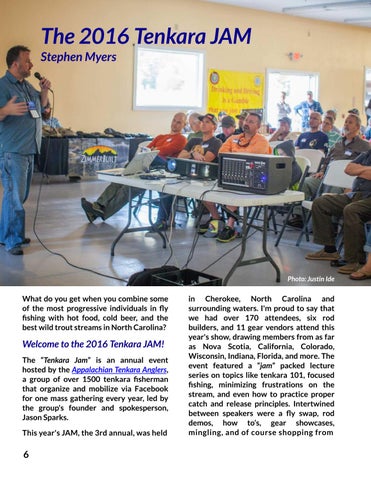 What do you get when you combine some of the most progressive individuals in ﬂy ﬁshing with hot food, cold beer, and the best wild trout streams in North Carolina?

The “Tenkara Jam” is an annual event hosted by the Appalachian Tenkara Anglers, a group of over 1500 tenkara ﬁsherman that organize and mobilize via Facebook for one mass gathering every year, led by the group's founder and spokesperson, Jason Sparks. This year's JAM, the 3rd annual, was held

in Cherokee, North Carolina and surrounding waters. I'm proud to say that we had over 170 attendees, six rod builders, and 11 gear vendors attend this year's show, drawing members from as far as Nova Scotia, California, Colorado, Wisconsin, Indiana, Florida, and more. The event featured a “jam” packed lecture series on topics like tenkara 101, focused ﬁshing, minimizing frustrations on the stream, and even how to practice proper catch and release principles. Intertwined between speakers were a ﬂy swap, rod demos, how to’s, gear showcases, mingling, and of course shopping from