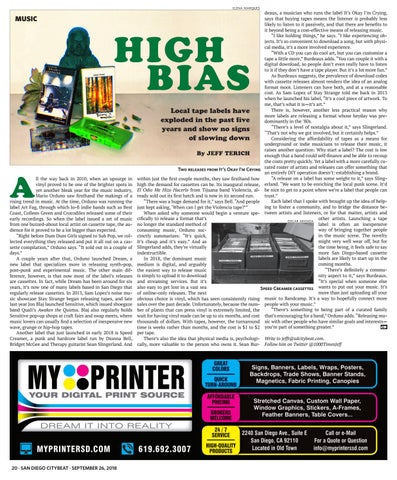 ll the way back in 2010, when an upsurge in vinyl proved to be one of the brighter spots in yet another bleak year for the music industry, Mario Orduno saw firsthand the makings of a rising trend in music. At the time, Orduno was running the label Art Fag, through which lo-fi indie bands such as Best Coast, Colleen Green and Crocodiles released some of their early recordings. So when the label issued a set of music from one buzzed-about local artist on cassette tape, the audience for it proved to be a lot bigger than expected. “Right before Dum Dum Girls signed to Sub Pop, we collected everything they released and put it all out on a cassette compilation,” Orduno says. “It sold out in a couple of days.” A couple years after that, Orduno launched Dream, a new label that specializes more in releasing synth-pop, post-punk and experimental music. The other main difference, however, is that now most of the label’s releases are cassettes. In fact, while Dream has been around for six years, it’s now one of many labels based in San Diego that regularly release cassettes. In 2013, Sam Lopez’s noise music showcase Stay Strange began releasing tapes, and late last year Jon Blaj launched Sensitive, which issued shoegaze band Quali’s Awaken the Quietus. Blaj also regularly holds Sensitive pop-up shops at craft fairs and swap meets, where music lovers can usually find a selection of inexpensive new wave, grunge or hip-hop tapes. Another label that just launched in early 2018 is Speed Creamer, a punk and hardcore label run by Dionna Bell, Bridget McGee and Therapy guitarist Sean Slingerland. And

deaux, a musician who runs the label It’s Okay I’m Crying, says that buying tapes means the listener is probably less likely to listen to it passively, and that there are benefits to it beyond being a cost-effective means of releasing music. “I like holding things,” he says. “I like experiencing objects. It’s so convenient to download a song, but with physical media, it’s a more involved experience. “With a CD you can do cool art, but you can customize a tape a little more,” Burdeaux adds. “You can couple it with a digital download, so people don’t even really have to listen to it if they don’t have a tape player. But it’s a lot more fun.” As Burdeaux suggests, the prevalence of download codes with cassette releases almost renders the idea of an analog format moot. Listeners can have both, and at a reasonable cost. As Sam Lopez of Stay Strange told me back in 2013 when he launched his label, “It’s a cool piece of artwork. To me, that’s what it is—it’s art.” There is, however, another less practical reason why more labels are releasing a format whose heyday was predominantly in the ’80s. “There’s a level of nostalgia about it,” says Slingerland. “That’s not why we got involved, but it certainly helps.” Considering the affordability of tapes as a means for underground or indie musicians to release their music, it raises another question: Why start a label? The cost is low enough that a band could self-finance and be able to recoup the costs pretty quickly. Yet a label with a more carefully cuTwo releases from It’s Okay I’m Crying rated roster of artists and releases can offer something that an entirely DIY operation doesn’t: establishing a brand. “A release on a label has some weight to it,” says Slingwithin just the first couple months, they saw firsthand how high the demand for cassettes can be. Its inaugural release, erland. “We want to be enriching the local punk scene. It’d El Odio Me Hizo Hacerlo from Tijuana band Violencia, al- be nice to get to a point where we’re a label that people can trust.” ready sold out its first batch and is now in its second run. Each label that I spoke with brought up the idea of help“There was a huge demand for it,” says Bell. “And people ing to foster a community, and to bridge the distance bejust kept asking, ‘When can I get the Violencia tape?’” When asked why someone would begin a venture spe- tween artists and listeners, or for that matter, artists and other artists. Launching a tape cifically to release a format that’s OSCAR ARANDA label is often an inexpensive no longer the standard method of way of bringing together people consuming music, Orduno sucin the music scene. The novelty cinctly summarizes: “It’s quick, might very well wear off, but for it’s cheap and it’s easy.” And as the time being, it feels safe to say Slingerland adds, they’re virtually more San Diego-based cassette indestructible. labels are likely to start up in the In 2018, the dominant music coming months. medium is digital, and arguably “There’s definitely a commuthe easiest way to release music nity aspect to it,” says Burdeaux. is simply to upload it to download “It’s special when someone else and streaming services. But it’s also easy to get lost in a vast sea Speed Creamer cassettes wants to put out your music. It’s more than just uploading all your of online-only releases. The next obvious choice is vinyl, which has seen consistently rising music to Bandcamp. It’s a way to hopefully connect more sales over the past decade. Unfortunately, because the num- people with your music.” “There’s something to being part of a curated family ber of plants that can press vinyl is extremely limited, the wait for having vinyl made can be up to six months, and cost that’s encouraging for a band,” Orduno adds. “Releasing muthousands of dollars. With tapes, however, the turnaround sic with other people who have similar goals and interests— time is weeks rather than months, and the cost is $1 to $2 you’re part of something greater.” per tape. There’s also the idea that physical media is, psychologi- Write to jefft@sdcitybeat.com. cally, more valuable to the person who owns it. Sean Bur- Follow him on Twitter @1000TimesJeff