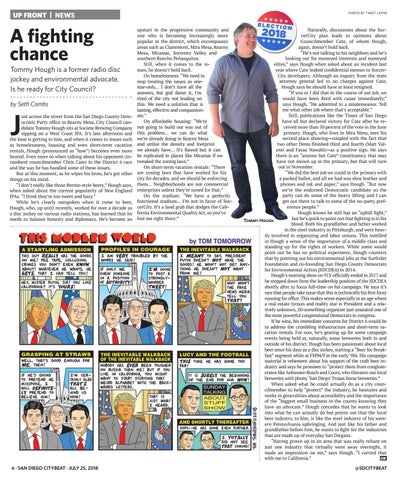 A fighting chance Tommy Hough is a former radio disc jockey and environmental advocate. Is he ready for City Council? by Seth Combs

ust across the street from the San Diego County Democratic Party office in Kearny Mesa, City Council candidate Tommy Hough sits at Societe Brewing Company sipping on a West Coast IPA. It’s late afternoon and the heat is getting to him, and when it comes to issues such as homelessness, housing and even short-term vacation rentals, Hough (pronounced as “how”) becomes even more heated. Even more so when talking about his opponent (incumbent councilmember Chris Cate) in the District 6 race and the way he has handled some of these issues. But at this moment, as he wipes his brow, he’s got other things on his mind. “I don’t really like those Bernie-style beers,” Hough says, when asked about the current popularity of New England IPAs. “I think they’re too sweet and hazy.” While he’s clearly outspoken when it come to beer, Hough, who, up until recently, worked for over a decade as a disc jockey on various radio stations, has learned that he needs to balance honesty and diplomacy. He’s become an

upstart in the progressive community and one who is becoming increasingly more popular in the district, which encompasses areas such as Clairemont, Mira Mesa, Kearny Mesa, Miramar, Sorrento Valley and southern Rancho Peñasquitos. Still, when it comes to the issues, he doesn’t hold back. On homelessness: “We need to stop treating the issues as onesize-only… I don’t have all the answers, but god damn it, I’m tired of the city not leading on this. We need a solution that is lasting, effective and compassionate.” On affordable housing: “We’re not going to build our way out of this problem… we can do what we’re already doing in Kearny Mesa and utilize the density and footprint we already have… It’s flawed but it can be replicated in places like Miramar if we tweaked the zoning laws.” On short-term vacation rentals: “There are zoning laws that have worked for his city for decades, and we should be enforcing them… Neighborhoods are not commercial enterprises unless they’re zoned for that.” On the stadium: “We have a perfectly functional stadium… I’m not in favor of SoccerCity. It’s a land grab that dodges the California Environmental Quality Act, so you’ve lost me right there.”

Naturally, discussions about the SoccerCity plan leads to opinions about Councilmember Cate, of whom Hough, again, doesn’t hold back. “He’s not talking to his neighbors and he’s looking out for moneyed interests and moneyed elites,” says Hough when asked about an incident last year where Cate leaked confidential memos to SoccerCity developers. Although an inquiry from the state attorney general led to no charges against Cate, Hough says he should have at least resigned. “If you or I did that in the course of our job, we would have been fired with cause immediately,” says Hough. “He admitted to a misdemeanor. Tell me what other job where that’s acceptable.” Still, publications like the Times of San Diego have all but declared victory for Cate after he received more than 50 percent of the vote in the June primary. Hough, who lives in Mira Mesa, sees his second place showing—coupled with the fact that two other Dems finished third and fourth (Matt Valenti and Fayaz Nawabi)—as a positive sign. He says there is an “anyone but Cate” constituency that may have not shown up in the primary, but that will turn out in November. “We did the best job we could in the primary with a packed ballot, and all we had was shoe leather and phones and ink and paper,” says Hough. “But now we’re the endorsed Democratic candidate so the party can do some of the heavy lifting and I can get out there to talk to some of the no-party preference people.” Hough knows he still has an “uphill fight,” but he’s quick to point out that fighting is in his Tommy Hough blood. Both his grandfather and father worked in the steel industry in Pittsburgh, and were heavily involved in organizing and labor unions. This instilled in Hough a sense of the importance of a middle class and standing up for the rights of workers. While some would point out he has no political experience, Hough counters that by pointing out his environmental jobs at the Surfrider Foundation and co-founding San Diego County Democrats for Environmental Action [SDCDEA] in 2014. Hough’s morning show on 91X officially ended in 2017 and he stepped down from the leadership position of the SDCDEA shortly after to focus full-time on his campaign. He says it’s rare that people take issue that this is technically his first foray running for office. This makes sense especially in an age where a real estate tycoon and reality star is President and a relatively unknown, 20-something organizer just unseated one of the most powerful congressional Democrats in congress. If he wins, his immediate concerns for District 6 would be to address the crumbling infrastructure and short-term vacation rentals. For now, he’s gearing up for some campaign events being held at, naturally, some breweries both in and outside of his district. Hough has been passionate about local beer since his days as a disc jockey, starting a “Beer for Breakfast” segment while at FM94/9 in the early ’00s. His campaign material is vehement about his support of the craft beer industry and says he promises to “protect them from conglomerates like Anheuser-Busch and Coors, who threaten our local breweries with phony ‘San Diego’ Trojan horse breweries.” When asked what he could actually do as a city councilmember to help “protect” the industry, he hesitates and works in generalities about accessibility and the importance of the “biggest small business in the county knowing they have an advocate.” Hough concedes that he wants to look into what he can actually do but points out that the local beer industry, to him, is like the steel industry of his western Pennsylvania upbringing. And just like his father and grandfather before him, he wants to fight for the industries that are made up of everyday San Diegans. “Having grown up in an area that was really reliant on just one industry that virtually went away overnight, it made an impression on me,” says Hough. “I carried that with me to California.”