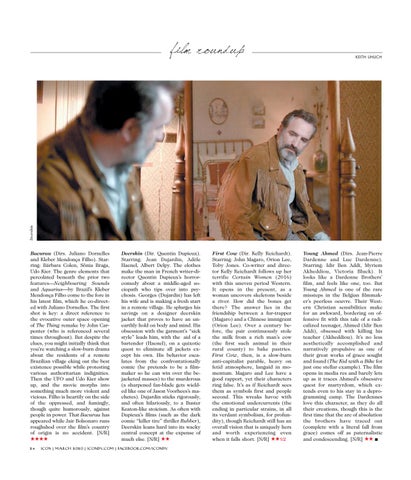 Bacurau (Dirs. Juliano Dornelles and Kleber Mendonça Filho). Starring: Bárbara Colen, Sônia Braga, Udo Kier. The genre elements that percolated beneath the prior two features—Neighbouring Sounds and Aquarius—by Brazil’s Kleber Mendonça Filho come to the fore in his latest film, which he co-directed with Juliano Dornelles. The first shot is key: a direct reference to the evocative outer space opening of The Thing remake by John Carpenter (who is referenced several times throughout). But despite the clues, you might initially think that you’re watching a slow-burn drama about the residents of a remote Brazilian village eking out the best existence possible while protesting various authoritarian indignities. Then the UFO and Udo Kier show up, and the movie morphs into something much more violent and vicious. Filho is heartily on the side of the oppressed, and fumingly, though quite humorously, against people in power. That Bacurau has appeared while Jair Bolsonaro runs roughshod over the film’s country of origin is no accident. [N/R]

Deerskin (Dir. Quentin Dupieux). Starring: Jean Dujardin, Adèle Haenel, Albert Delpy. The clothes make the man in French writer-director Quentin Dupieux’s horrorcomedy about a middle-aged sociopath who tips over into psychosis. Georges (Dujardin) has left his wife and is making a fresh start in a remote village. He splurges his savings on a designer deerskin jacket that proves to have an unearthly hold on body and mind. His obsession with the garment’s “sick style” leads him, with the aid of a bartender (Haenel), on a quixotic quest to eliminate all jackets except his own. His behavior escalates from the confrontationally comic (he pretends to be a filmmaker so he can win over the bejacketed masses) to the murderous (a sharpened fan-blade gets wielded like one of Jason Voorhees’s machetes). Dujardin sticks rigorously, and often hilariously, to a Buster Keaton-like stoicism. As often with Dupieux’s films (such as the dark comic “killer tire” thriller Rubber), Deerskin leans hard into its wacky central concept at the expense of much else. [N/R] HH

First Cow (Dir. Kelly Reichardt). Starring: John Magaro, Orion Lee, Toby Jones. Co-writer and director Kelly Reichardt follows up her terrific Certain Women (2016) with this uneven period Western. It opens in the present, as a woman uncovers skeletons beside a river. How did the bones get there? The answer lies in the friendship between a fur-trapper (Magaro) and a Chinese immigrant (Orion Lee). Over a century before, the pair continuously stole the milk from a rich man’s cow (the first such animal in their rural county) to bake pastries. First Cow, then, is a slow-burn anti-capitalist parable, heavy on fetid atmosphere, languid in momentum. Magaro and Lee have a good rapport, yet their characters ring false. It’s as if Reichardt sees them as symbols first and people second. This wreaks havoc with the emotional undercurrents (the ending in particular strains, in all its verdant symbolism, for profundity), though Reichardt still has an overall vision that is uniquely hers and worth experiencing even when it falls short. [N/R] HH1/2

Young Ahmed (Dirs. Jean-Pierre Dardenne and Luc Dardenne). Starring: Idir Ben Addi, Myriem Akheddiou, Victoria Bluck). It looks like a Dardenne Brothers’ film, and feels like one, too. But Young Ahmed is one of the rare missteps in the Belgian filmmaker’s peerless oeuvre. Their Western Christian sensibilities make for an awkward, bordering on offensive fit with this tale of a radicalized teenager, Ahmed (Idir Ben Addi), obsessed with killing his teacher (Akheddiou). It’s no less aesthetically accomplished and narratively propulsive as one of their great works of grace sought and found (The Kid with a Bike for just one stellar example). The film opens in media res and barely lets up as it traces Ahmed’s obsessive quest for martyrdom, which extends even to his stay in a deprogramming camp. The Dardennes love this character, as they do all their creations, though this is the first time that the arc of absolution the brothers have traced out (complete with a literal fall from grace) comes off as paternalistic and condescending. [N/R] HH n