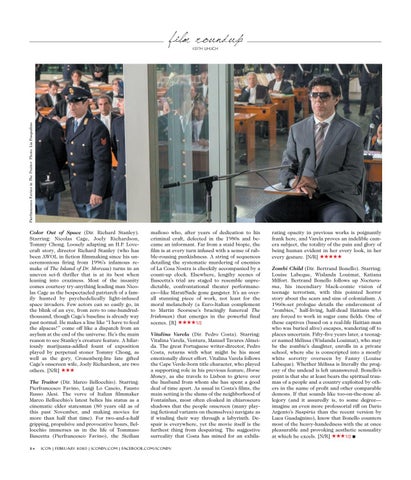 Color Out of Space (Dir. Richard Stanley). Starring: Nicolas Cage, Joely Richardson, Tommy Chong. Loosely adapting an H.P. Lovecraft story, director Richard Stanley (who has been AWOL in fiction filmmaking since his unceremonious firing from 1996’s infamous remake of The Island of Dr. Moreau) turns in an uneven sci-fi thriller that is at its best when leaning into craziness. Most of the insanity comes courtesy try-anything leading man Nicolas Cage as the bespectacled patriarch of a family hunted by psychedelically light-infused space invaders. Few actors can so easily go, in the blink of an eye, from zero to one-hundredthousand, though Cage’s baseline is already way past normal. He makes a line like “I have to feed the alpacas!” come off like a dispatch from an asylum at the end of the universe. He’s the main reason to see Stanley’s creature feature. A hilariously marijuana-addled fount of exposition played by perpetual stoner Tommy Chong, as well as the gory, Cronenberg-lite fate gifted Cage’s onscreen wife, Joely Richardson, are two others. [N/R] HHH The Traitor (Dir. Marco Bellocchio). Starring: Pierfrancesco Favino, Luigi Lo Cascio, Fausto Russo Alesi. The verve of Italian filmmaker Marco Bellocchio’s latest belies his status as a cinematic elder statesman (80 years old as of this past November, and making movies for more than half that time). For two-and-a-half gripping, propulsive and provocative hours, Bellocchio immerses us in the life of Tommaso Buscetta (Pierfrancesco Favino), the Sicilian 24

mafioso who, after years of dedication to his criminal craft, defected in the 1980s and became an informant. Far from a staid biopic, the film is at every turn infused with a sense of rabble-rousing punkishness. A string of sequences detailing the systematic murdering of enemies of La Cosa Nostra is cheekily accompanied by a count-up clock. Elsewhere, lengthy scenes of Buscetta’s trial are staged to resemble unpredictable, confrontational theater performances—like Marat/Sade gone gangster. It’s an overall stunning piece of work, not least for the moral melancholy (a Euro-Italian complement to Martin Scorsese’s bracingly funereal The Irishman) that emerges in the powerful final scenes. [R] HHHH1/2 Vitalina Varela (Dir. Pedro Costa). Starring: Vitalina Varela, Ventura, Manuel Tavares Almeida. The great Portuguese writer-director, Pedro Costa, returns with what might be his most emotionally direct effort. Vitalina Varela follows the Cape Verde-born title character, who played a supporting role in his previous feature, Horse Money, as she travels to Lisbon to grieve over the husband from whom she has spent a good deal of time apart. As usual in Costa’s films, the main setting is the slums of the neighborhood of Fontaínhas, most often cloaked in chiaroscuro shadows that the people onscreen (many playing fictional variants on themselves) navigate as if winding their way through a labyrinth. Despair is everywhere, yet the movie itself is the furthest thing from despairing. The suggestive surreality that Costa has mined for an exhila-

rating opacity in previous works is poignantly frank here, and Varela proves an indelible camera subject, the totality of the pain and glory of being human evident in her every look, in her every gesture. [N/R] HHHHH Zombi Child (Dir. Bertrand Bonello). Starring: Louise Labeque, Wislanda Louimat, Katiana Milfort. Bertrand Bonello follows up Nocturama, his incendiary black-comic vision of teenage terrorism, with this pointed horror story about the scars and sins of colonialism. A 1960s-set prologue details the enslavement of “zombies,” half-living, half-dead Haitians who are forced to work in sugar cane fields. One of these captives (based on a real-life Haitian man who was buried alive) escapes, wandering off to places uncertain. Fifty-five years later, a teenager named Mélissa (Wislanda Louimat), who may be the zombie’s daughter, enrolls in a private school, where she is conscripted into a mostly white sorority overseen by Fanny (Louise Labeque). Whether Mélissa is literally the progeny of the undead is left unanswered. Bonello’s point is that she at least bears the spiritual traumas of a people and a country exploited by others in the name of profit and other comparable demons. If that sounds like too-on-the-nose allegory (and it assuredly is, to some degree— imagine an even more professorial riff on Dario Argento’s Suspiria than the recent version by Luca Guadagnino), know that Bonello counters most of the heavy-handedness with the at once pleasurable and provoking aesthetic sensuality at which he excels. [N/R] HHH1/2 n